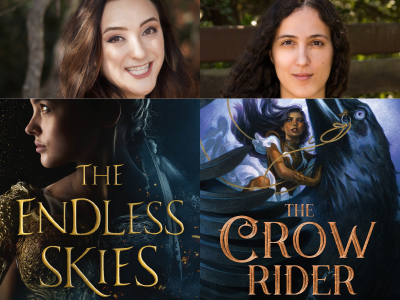 YA@BooksInc. proudly presents Bay Area writer Shannon Price in celebration of her new breakout standalone epic fantasy YA novel, The Endless Skies. Shannon will be in conversation with friend and fellow-local-author Kalyn Josephson, author of the critically-acclaimed duology The Storm Crow #1 and The Crow Rider: Storm Crow #2. Plus! Shannon and Kalyn will be stopping by Books Inc. to sign all copies of their books sold through Eventbrite registration.

About The Endless Skies: High above the sea, floats the pristine city of the Heliana. Home to winged-lion shapeshifters--the Leonodai--and protected from the world of humans by an elite group of warriors, the Heliana has only known peace.
After years of brutal training, seventeen-year-old Rowan is ready to prove her loyalty to the city and her people to become one of the Leonodai warriors. But before Rowan can take the oath, a deadly disease strikes the city's children. Soon the warriors--including two of Rowan's closest friends--are sent on a dangerous mission to find a fabled panacea deep within enemy lands.
Left behind, Rowan learns a devastating truth that could compromise the mission and the fate of the Heliana itself. She must make a decision: stay with the city and become a warrior like she always dreamed, or risk her future in an attempt to save everyone she loves. Whatever Rowan decides, she has to do it fast, because time is running out, and peace can only last so long...
About The Storm Crow #1: Indigo's best YA books of 2019 * B&N's best YA books of July 2019 * Goodread's most popular 2019 debuts
The first book in Kalyn Josephson's must-read (Adrienne Young) Storm Crow duology, a YA fantasy series that follows a fallen princess who ignites a rebellion, perfect for fans of Sarah J. Maas, Leigh Bardugo and And I Darken.
Princess Thia was born to be a crow rider--a warrior. In her kingdom of Rhodaire, magical elemental crows keep the city running. But when the Illucian empire invades, they kill all the crows in a horrible fire that also robs Thia of her mother and mentor.
Then Thia's sister, Caliza, becomes the new queen of Rhodaire, she is forced to agree to a marriage between Thia and the Illucian heir in an effort to save her people. Prince Ericen is rude and cruel and Thia can't imagine traveling into the heart of an enemy city after so much has been taken from her.
But before she leaves, she finds a crow egg in the rubble of the rookery. Deep in the heart of Ilucia she must hatch the last crow, hold her own against the crown prince, and ignite a rebellion to take back what is hers.
About The Crow Rider: The thrilling conclusion to the epic Storm Crow duology that follows a fallen princess as she fights to bring back the magical elemental crows taken from her people, perfect for readers of YA fantasy and fiction that includes young adult mental health representation. Now in paperback!
This paperback edition includes two exclusive short stories from The Storm Crow duology!
Thia, her allies, and her crow, Res, are planning a rebellion to defeat Queen Razel and Illucia once and for all. Thia must convince the neighboring kingdoms to come to her aid, and Res's show of strength is the only thing that can help her.
But so many obstacles stand in her way. Res excels at his training, until he loses control of his magic, harming Thia in the process. She is also pursued by Prince Ericen, heir to the Illucian throne and the one person she can't trust but can't seem to stay away from.
As the rebel group prepares for war, Res's magic grows more unstable. Thia has to decide if she can rely on herself and their bond enough to lead the rebellion and become the crow rider she was meant to be.
Event date:
Tuesday, August 17, 2021 - 5:00pm
Event address:
Virtual Event-Via Zoom
Pacific Standard Time
San Francisco, CA
Virtual Events
YA @ Books Inc:
San Francisco Events
East Bay Events
Peninsula Events
South Bay
............