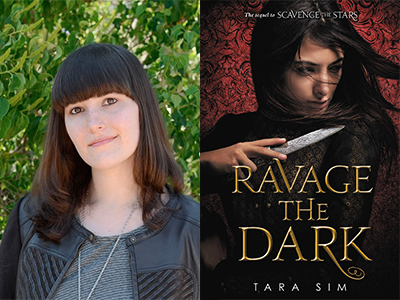 YA @ Books Inc proudly presents local author Tara Sim in celebration of the highly anticipated sequel of Scavenge the Stars, Ravage the Dark. Tara will be in conversation with Margaret Owen, author of The Merciful Crow and The Faithless Hawk.

About Ravage the Dark: Step into an opulent world filled with risk, romance, and revenge and find out whether two unlikely heroes can save the world and stop corruption.
For seven long years, while she was imprisoned on a debtor's ship, Amaya Chandra had one plan: to survive. But now, survival is not enough. She has people counting on her; counting on her for protection, for leadership, for vengeance. And after escaping Moray by the skin of her teeth, she's determined to track down the man who betrayed her and her friends.
Cayo Mercado has lost everything: his money, his father, his reputation. Everything except his beloved sister. But he's well on his way to losing her, too, with no way to afford the treatment for her deadly illness. In a foreign empire also being consumed by ash fever, Cayo has no choice but to join Amaya in uncovering the mystery of the counterfeit currency, the fever, and how his father was involved in their creation. But Cayo still hasn't forgiven Amaya for her earlier deception, and their complicated feelings for each other are getting harder and harder to ignore.
Through glittering galas, dazzling trickery, and thrilling heists, Cayo and Amaya will learn that the corruption in Moray goes far deeper than they know, and in the end the only people they can trust are each other.
About The Faithless Hawk: Kings become outcasts and lovers become foes in The Faithless Hawk, the thrilling sequel to Margaret Owen's The Merciful Crow.
As the new chieftain of the Crows, Fie knows better than to expect a royal to keep his word. Still she's hopeful that Prince Jasimir will fulfill his oath to protect her fellow Crows. But then black smoke fills the sky, signaling the death of King Surimir and the beginning of Queen Rhusana's merciless bid for the throne.
With the witch queen using the deadly plague to unite the nation of Sabor against Crows--and add numbers to her monstrous army--Fie and her band are forced to go into hiding, leaving the country to be ravaged by the plague. However, they're all running out of time before the Crows starve in exile and Sabor is lost forever.
A desperate Fie calls on old allies to help take Rhusana down from within her own walls. But inside the royal palace, the only difference between a conqueror and a thief is an army. To survive, Fie must unravel not only Rhusana's plot, but ancient secrets of the Crows--secrets that could save her people, or set the world ablaze.

Tara Sim is a YA fantasy author who can typically be found wandering the wilds of the Bay Area, California. She is the author of the Timekeeper trilogy, which has been featured on Entertainment Weekly, Bustle, and various media outlets. When she's not chasing cats or lurking in bookstores, she writes books about magic, clocks, and explosives.

Margaret Owen was born and raised at the end of the Oregon Trail and has worked in everything from thrift stores to presidential campaigns. The common thread between every job can be summed up as: lessons were learned. She now spends her days writing and negotiating a long-term hostage situation with her two monstrous cats. She is the author of the Merciful Crow series. In her free time, she enjoys exploring ill-advised travel destinations and raising money for social justice nonprofits through her illustrations. She resides in Seattle, Washington.