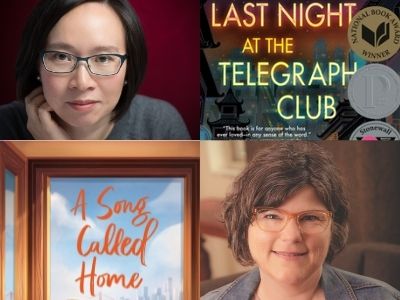 *Please Note: Face masks must be worn while you are in the bookstore.*

YA @ Books Inc. presents Winner of the National Book Award writer Malinda Lo in celebration of her new novel,  Last Night at the Telegraph Club. Malinda will be in conversation with Sara Zarr, author of six acclaimed novels for young adults, including Story of a Girl, The Lucy Variations, and Gem & Dixie.

Seventeen-year-old Lily Hu can't remember exactly when the feeling took root—that desire to look, to move closer, to touch. Whenever it started growing, it definitely bloomed the moment she and Kathleen Miller walked under the flashing neon sign of a lesbian bar called the Telegraph Club. Suddenly everything seemed possible.

But America in 1954 is not a safe place for two girls to fall in love, especially not in Chinatown. Red-Scare paranoia threatens everyone, including Chinese Americans like Lily. With deportation looming over her father—despite his hard-won citizenship—Lily and Kath risk everything to let their love see the light of day.

From award-winning author Sara Zarr comes a story of the small moments that show us who we are, and how family is not just something you’re part of, but something you make.

Lou and her family don’t have much, but for Lou it's enough. Mom. Her sister, Casey. Their apartment in the city. Her best friend, Beth. It would be better if Dad could stop drinking and be there for her and Casey, and if they didn't have to worry about money all the time. But Lou doesn’t need better—she only needs enough.

What’s enough for Lou, however, is not enough for Mom. Steve, Mom's boyfriend, isn’t a bad guy, he's just…not what Lou is used to. And now, he and Mom are getting married, and that means moving. Packing up life as they’ve known it and storing it in Steve’s garage. Lou will be separated from everything in her small but predictable life, farther from Dad than ever.

Their last night in the city, Lou receives a mysterious birthday gift: A guitar, left for her by their front door. There’s nothing saying who left it, but it must be from Dad. And as she leaves the only place she’s ever known, she starts to believe that if she can learn how to play it, maybe she can bring a piece of him, and of her old life, home.