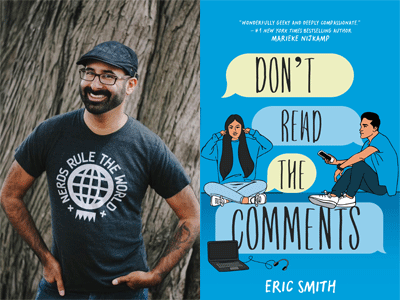 YA @ Books Inc presents Young Adult author and literary agent Eric Smith in celebration of his clever new novel, Don't Read the Comments. Eric will be in conversation with local writer Tara Sim, author of Scavenge the Stars, and Misa Sugiura, author of This Time Will Be Different.

About Don't Read the Comments: Divya Sharma is a queen. Or she is when she's playing Reclaim the Sun, the year's hottest online game. Divya--better known as popular streaming gamer D1V--regularly leads her #AngstArmada on quests through the game's vast and gorgeous virtual universe. But for Divya, this is more than just a game. Out in the real world, she's trading her rising-star status for sponsorships to help her struggling single mom pay the rent.

Gaming is basically Aaron Jericho's entire life. Much to his mother's frustration, Aaron has zero interest in becoming a doctor like her, and spends his free time writing games for a local developer. At least he can escape into Reclaim the Sun--and with a trillion worlds to explore, disappearing should be easy. But to his surprise, he somehow ends up on the same remote planet as celebrity gamer D1V.

At home, Divya and Aaron grapple with their problems alone, but in the game, they have each other to face infinite new worlds...and the growing legion of trolls populating them. Soon the virtual harassment seeps into reality when a group called the Vox Populi begin launching real-world doxxing campaigns, threatening Aaron's dreams and Divya's actual life. The online trolls think they can drive her out of the game, but everything and everyone Divya cares about is on the line...

And she isn't going down without a fight.

About Scavenge the Stars: When Amaya rescues a mysterious stranger from drowning, she fears her rash actions have earned her a longer sentence on the debtor ship where she's been held captive for years. Instead, the man she saved offers her unimaginable riches and a new identity, setting Amaya on a perilous course through the coastal city-state of Moray, where old-world opulence and desperate gamblers collide. Amaya wants one thing: revenge against the man who ruined her family and stole the life she once had. But the more entangled she becomes in this game of deception-and as her path intertwines with the son of the man she's plotting to bring down-the more she uncovers about the truth of her past. And the more she realizes she must trust no one?
Packed with high-stakes adventure, romance, and dueling identities, this gender-swapped retelling of The Count of Monte Cristo is the first novel in an epic YA fantasy duology, perfect for fans of Sarah J. Maas, Sabaa Tahir, and Leigh Bardugo.

About This Time Will Be Different: For fans of Jenny Han, Morgan Matson, and Sandhya Menon, critically acclaimed author Misa Sugiura delivers a richly crafted contemporary YA novel about family, community, and the importance of writing your own history.

The author of the Asian Pacific American Award-winning It's Not Like It's a Secret is back with another smartly drawn coming-of-age novel that weaves riveting family drama, surprising humor, and delightful romance into a story that will draw you in from the very first page.

Katsuyamas never quit--but seventeen-year-old CJ doesn't even know where to start. She's never lived up to her mom's type A ambition, and she's perfectly happy just helping her aunt, Hannah, at their family's flower shop.

She doesn't buy into Hannah's romantic ideas about flowers and their hidden meanings, but when it comes to arranging the perfect bouquet, CJ discovers a knack she never knew she had. A skill she might even be proud of.

Then her mom decides to sell the shop--to the family who swindled CJ's grandparents when thousands of Japanese Americans were sent to internment camps during WWII. Soon a rift threatens to splinter CJ's family, friends, and their entire Northern California community; and for the first time, CJ has found something she wants to fight for.

This Time Will Be Different (Hardcover)