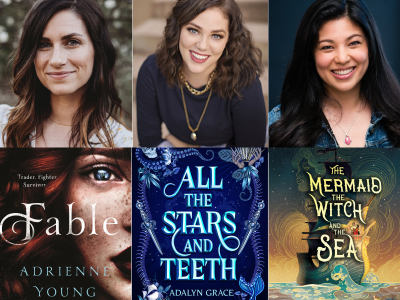 *This event has been canceled due to family emergency. Thank you for your understanding.

Lift your anchors and join YA @ Books Inc for the "Found at Sea" panel featuring Adrienne Young, author of the vivid new novel Fable; Adalyn Grace, author of the darkly fantastic novel All the Stars and Teeth; and Maggie Tokuda-Hall, author of the shimmering novel The Mermaid, the Witch, and the Sea.

As the daughter of the most powerful trader in the Narrows, the sea is the only home seventeen-year-old Fable has ever known. It's been four years since the night she watched her mother drown during an unforgiving storm. The next day her father abandoned her on a legendary island filled with thieves and little food. To survive she must keep to herself, learn to trust no one and rely on the unique skills her mother taught her. The only thing that keeps her going is the goal of getting off the island, finding her father and demanding her rightful place beside him and his crew. To do so Fable enlists the help of a young trader named West to get her off the island and across the Narrows to her father.
But her father's rivalries and the dangers of his trading enterprise have only multiplied since she last saw him and Fable soon finds that West isn't who he seems. Together, they will have to survive more than the treacherous storms that haunt the Narrows if they're going to stay alive.
Fable takes you on a spectacular journey filled with romance, intrigue and adventure.
About All the Stars and Teeth: Set in a kingdom where danger lurks beneath the sea, mermaids seek vengeance with song, and magic is a choice, Adalyn Grace's All the Stars and Teeth is a thrilling fantasy for fans of Stephanie Garber's Caraval and Sarah J. Maas's Throne of Glass series.
She will reign.
As princess of the island kingdom Visidia, Amora Montara has spent her entire life training to be High Animancer--the master of souls. The rest of the realm can choose their magic, but for Amora, it's never been a choice. To secure her place as heir to the throne, she must prove her mastery of the monarchy's dangerous soul magic.
When her demonstration goes awry, Amora is forced to flee. She strikes a deal with Bastian, a mysterious pirate: he'll help her prove she's fit to rule, if she'll help him reclaim his stolen magic.
But sailing the kingdom holds more wonder--and more peril--than Amora anticipated. A destructive new magic is on the rise, and if Amora is to conquer it, she'll need to face legendary monsters, cross paths with vengeful mermaids, and deal with a stowaway she never expected... or risk the fate of Visidia and lose the crown forever.
I am the right choice. The only choice. And I will protect my kingdom.
About The Mermaid, the Witch, and the Sea: In a world divided by colonialism and threaded with magic, a desperate orphan turned pirate and a rebellious imperial lady find a connection on the high seas.
The pirate Florian, born Flora, has always done whatever it takes to survive--including sailing under false flag on the Dove as a marauder, thief, and worse. Lady Evelyn Hasegawa, a highborn Imperial daughter, is on board as well--accompanied by her own casket. But Evelyn's one-way voyage to an arranged marriage in the Floating Islands is interrupted when the captain and crew show their true colors and enslave their wealthy passengers.
Both Florian and Evelyn have lived their lives by the rules, and whims, of others. But when they fall in love, they decide to take fate into their own hands--no matter the cost.
Maggie Tokuda-Hall's sweeping fantasy debut, full of stolen memories, illicit mermaid's blood, double agents, and haunting mythical creatures conjures an extraordinary cast of characters and the unforgettable story of a couple striving to stay together in the face of myriad forces wishing to control their identities and destinies.
Event date:
Monday, September 21, 2020 - 5:00pm
Event address:
Eventbrite Registration
Zoom
San Francisco, CA
YA @ Books Inc:
San Francisco Events
East Bay Events
Peninsula Events
South Bay
............
Books:

The Mermaid, the Witch, and the Sea (Hardcover)