*SOLD OUT* GRACE BONNEY at California College of the Arts 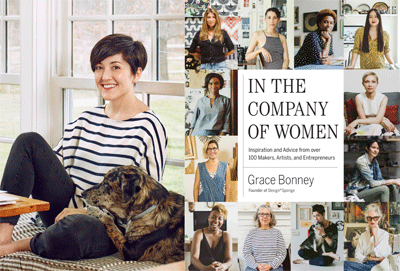 Join Books Inc. at Calfornia College of the Arts for a special event with Design*Sponge Founder GRACE BONNEY presenting her new book, In the Company of Women: Inspiration and Advice from over 100 Makers, Artists, and Entrepreneurs. Grace will be joined in conversation by 4 local extraordinary women: Samin Nosrat, writer, cook, and teacher; Preeti Mistry, Top Chef Season Six contestant and and owner of Oakland's Juhu Beach Club; Christine Schmidt, founder of the stationary store Yellow Owl Workshop; and Thao Nguyen, singer and songwriter in the band Thao & The Get Down Stay Down.

This is a ticketed event. Each ticket includes a copy of In the Company of Women and this limited edition totebag! 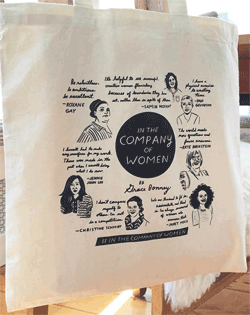 Grace will be joined by....

Samin Nosrat is a writer, teacher, and chef living in Berkeley, California.  Her first book, Salt, Fat, Acid, Heat: Mastering the Elements of Good Cooking, will be published in April 2017.

Preeti Mistry was born in London and raised in the US. She is the chef and co-owner of Juhu Beach Club, a restaurant serving New Indian Cuisine in Oakland, California. Prior to Juhu Beach Club, Preeti held Executive Chef roles at the deYoung Musuem, the Legion of Honor in San Francisco and Google HQ in Mountain View, CA.   She was a contestant on Top Chef Season Six. Preeti studied at Le Cordon Bleu Culinary Academy in London. When not running her restaurant Preeti enjoys playing tennis, eating pizza and growing veggies in her sunny Oakland backyard with her wife and business partner Ann Nadeau.

Christine Schmidt is the founder of Yellow Owl Workshop in San Francisco’s Mission district. Yellow Owl Workshop can be found in stores worldwide, but has stayed true to its original values of expert attention to detail, ecological awareness and premium U.S. made materials are evident in every product. Christine and her husband Evan live in San Francisco with their daughter, Emmy.

Thao Nguyen: Thao Nguyen is a singer, songwriter and musician based in San Francisco, California. She is a member of the band Thao & The Get Down Stay Down and has collaborated on projects with artists like Merrill Garbus, The Portland Cello Project, and Mirah. In addition to her work in music, Thao also works with outreach projects like Oxfam and California Coalition for Women Prisoners to raise awareness. Thao & the Get Down Stay Down just released their fourth studio album, A Man Alive.

Mary Going: Founder/CEO of Saint Harridan, an Oakland-based clothing company which produces masculine clothing and accessories for women and transmen and has been featured in articles appearing in The New York Times, Refinery 29, TechCrunch, Fortune,  and the San Francisco Chronicle, among others.