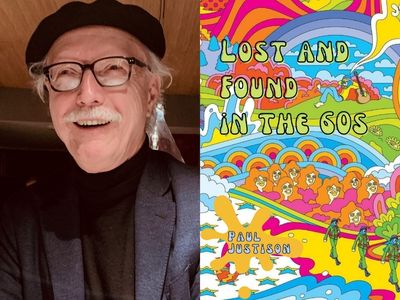 Books Inc. Campbell proudly presents local author Paul Justison for a reading from his debut novel Lost and Found in the 60s, a illuminating vision of San Francisco in the era of flower children, free love, and groovy music!

Alienated from a toxic mother, and in constant conflict at his conservative high school because of his radical politics, Mark Stenrud escapes to Haight-Ashbury, where he takes a job in the post office and settles into a carefree existence in the psychedelic center of the universe. LSD chemists notice his organizational skills and calmness in the face of danger and recruit him to join their enterprise. He accepts and has free time for romance, adventures, and street justice. After months of success, he loses his touch, leading to narrow escapes, bad decisions, and his own downfall. Along the way, he learns about loss, forgiveness, and the meaning of self-respect.

"This novel is excruciatingly accurate and totally outrageous. Justison has captured the extravagance of the time: the interplay of sexual liberation, psychedelic experiences and coming of age that made the community so intense and inviting. Was drug use so extensive and casual? You bet. Was casual sexual connecting so extensive and easy? Oh my, yes. The 60s, including its dark, scary, lonely, confused reality is all here, as well as the ecstasy, the kindness, and the sharing. If you weren't there, this is as close as you're going to get to knowing what you missed. The stories, the people, the vision- enjoy the trip."

"This lively and engaging novel chronicles the adventures of a high school drop-out who leaves Arizona for the Haight Ashbury in the 1960's where the credo was "Turn On, Tune In, Drop Out." The narrator, a bright, observant young man, quickly becomes part of Hippie culture of free love, tripping on marijuana and LSD, Be-Ins, Viet Nam War protests, and anti-draft demonstrations, which is captured in nuanced and textured detail. Central to this novel is the protagonist's deep respect for women as friends and lovers who are his equals in their shared explorations as well as existential lessons learned. For those who were there, this novel will bring it all back, for those who weren't, this novel is a vivid portrait of of the 60's."

Paul Justison dropped out of high school in 1966 and fled to Haight-Ashbury, spending most of the next two years there and in Marin County engaging in all the pleasures and follies that magical time had to offer. After the sixties ended, he went to college, started a career, and raised a family. He has been published in The Rumpus, The Gambler Mag, Flash Fiction Magazine, and Fiction on the Web. Lost and Found in the 60s is his first novel.

Lost and Found in the 60s (Paperback)