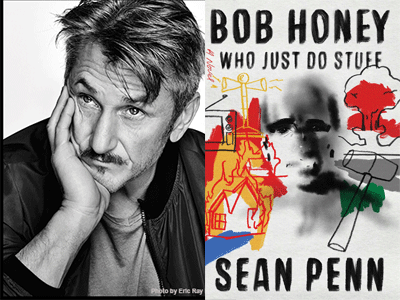 An Evening with Sean Penn

Author of "Bob Honey Who Just Do Stuff"

Bob Honey Who Just Do Stuff (Atria Books) by two-time Academy Award-winning actor, writer and director Sean Penn, is Mr. Penn's first novel. The darkly humorous novel tells the picaresque story of Bob Honey, a middle-aged, divorced, disillusioned man living in a nondescript house on a nondescript street in Woodview, California. Bob Honey is a man of many trades—sewage specialist, purveyor of pyrotechnics, contract killer for a mysterious government agency that pays in small bills. The novel is a revised and expanded work based on an audiobook (no longer available) narrated by Penn and released in October 2016 under the pseudonym Pappy Pariah.

As an actor, Penn has been nominated five times for an Academy Award® as Best Actor for Dead Man Walking, Sweet and Lowdown and I Am Sam and won his first Oscar® in 2003 for his searing performance in Clint Eastwood's Mystic River and his second in 2009 for Gus Van Sant's Milk. He has worked as an actor, writer, producer and director on over one hundred theater and film productions.

As a filmmaker, Penn has crafted powerful dramas such as The Indian Runner, The Pledge and Into the Wild, which garnered him nominations from the Directors Guild Awards and Writers Guild Awards. Additionally, Penn wrote and directed the United States' contribution to the compilation film 11'09'01.

In 2002, he penned a prescient open letter, which he published in The Washington Post and New York Times, to President George W. Bush against the planned invasion of Iraq. In 2004, Penn wrote a two-part feature in The San Francisco Chronicle after a second visit to the war-torn Iraq and in 2005, he wrote a five-part feature in the same paper reporting from Iran during the election which led to the Ahmadinejad regime. Additionally, Penn published landmark interviews with Venezuelan President Hugo Chavez and Cuba's President Raul Castro for The Nation and The Huffington Post; Penn's interview with Castro was his first-ever with an international journalist.

Reviews of Bob Honey Who Just Do Stuff:

"It seems wrong to say that so dystopian a novel is great fun to read, but it's true. I suspect that Thomas Pynchon and Hunter S. Thompson would love this book."
~Salman Rushdie

"Stunning poetic runs, crazy and chaotic. It's A Clockwork Orange world on Adderall. When I finished it, I immediately hugged my dog."
~Art Linson, author, producer of Fight Club and Sons of Anarchy

"Comic, cauchemaresque, crackling with life, Bob Honey is a hero of our Trumpian times reflected in the cracked mirror of Penn's prose. I loved that it defied the critics who are, as always like eunuchs in a harem—observing the creative act but unable to do the same."
~Paul Theroux, Costa Book Award–winning author of The Great Railway Bazaar and The Mosquito Coast

"It's an incredibly interesting book…it's well worth getting deeply into. It says something about the world that we live in that nobody else has said."
~Jane Smiley, Pulitzer Prize–winning author of A Thousand Acres

Each ticket includes a pre-signed copy of Bob Honey Who Just Do Stuff. There will not be a post-event book signing but additional books will be available for sale at the event for $24 plus tax. Book sales provided by Books Inc. Palo Alto.

Bob Honey Who Just Do Stuff: A Novel (Hardcover)