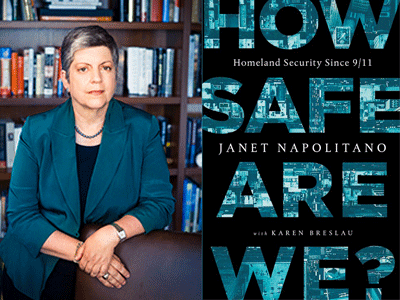 How Safe Are We?

Spend an evening learning about the state of our national security from one of the foremost experts in the field. Former Secretary of Homeland Security Janet Napolitano will be speaking about her experiences with domestic security, our current state of affairs, and what she sees as the road map for the future. Drawing on her personal experiences, as well as her new book, HOW SAFE ARE WE? Ms. Napolitano will shed light on how safe we truly are and what we can do to protect ourselves in an ever-changing world.

About the Book:
It has been nearly two decades since the terrorist attacks on September 11, 2001. In the years since that terrible day, the US has changed in fundamental ways: how we protect our borders, how we ward off foreign and domestic attacks within those borders, how we travel, how we respond to natural disasters and climate change, and, ultimately, how we conduct our politics. As the first US Secretary of Homeland Security during the Obama administration and the third in the department's history, Janet Napolitano shows in HOW SAFE ARE WE?: Homeland Security Since 9/11 what we have accomplished since that awful day, where the critical security gaps remain, and where dangerous new ones have opened—and how to close them. In doing so, she argues that political blind spots abound.

The book is peppered with stories from Napolitano's career—from her time as two-term governor of Arizona to her service in the Obama administration—with reflections on what it means to have a calling in public service, as well as the importance of changing expectations about whether women are "tough enough" to protect the public. "Homeland security is not only the job of the secretary or of the 240,000 professionals who work for the department," says Napolitano, "it is everyone's responsibility." If Americans work together to restore this common purpose, remain vigilant and refuse to live in fear, we can build a safe, secure and resilient way of life for all.

About the Author:
Janet Napolitano is a distinguished public servant with a record of leading large, complex organizations at the federal and state levels. She served as secretary of Homeland Security from 2009–2013. Before that, she was the governor of Arizona, previously serving as attorney general of Arizona and before that as US attorney for the District of Arizona. She was the first woman to chair the National Governors Association, and was named one of the nation's top five governors by Time magazine. Since 2013, she has served as the president of the University of California.

The evening will be moderated by Anne Elise Kornblut, a Pulitzer Prize-winning American journalist currently serving as Director of Strategic Communications for Facebook. Kornblut previously served as the Deputy National Editor of the Washington Post, overseeing national politics, national security and health/science/environmental coverage. In 2014, she was awarded the Pulitzer Prize for Public Service as the lead editor overseeing coverage of Edward Snowden's NSA revelations.

Buy your ticket/book bundle in advance and save! Ticket/book bundles will close on June 18. Books will be available for sale at the event for $26 plus tax. Book sales provided by Books Inc. Palo Alto.