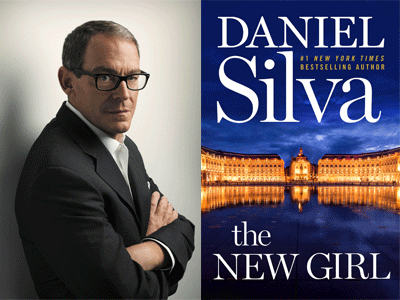 "The New Girl" | An Evening with Author Daniel Silva

Join us for a book event with #1 New York Times bestselling author Daniel Silva, where he will share tidbits about his book, The New Girl, set to release on July 16. The 19th installment in the Gabriel Allon series, The New Girl is a winding thriller steeped in mystery and deception. Join us for an insider's view into the process that put the words to the page, just days after The New Girl's release. Mr. Silva will also hold a book signing at the end of the event.

About The New Girl
"She was covered from head to toe in expensive wool and plaid, the sort of stuff one saw at the Burberry boutique in Harrods. She carried a leather bookbag rather than a nylon backpack. Her patent leather ballet slippers were glossy and bright. She was proper, the new girl, modest. But there was something else about her …

"At an exclusive private school in Switzerland, mystery surrounds the identity of the beautiful raven-haired girl who arrives each morning in a motorcade fit for a head of state. She is said to be the daughter of a wealthy international businessman. In truth, her father is Khalid bin Mohammed, the much-maligned crown prince of Saudi Arabia. Once celebrated for his daring social and religious reforms, he is now reviled for his role in the murder of a dissident journalist. And when his only child is brutally kidnapped, he turns to the one man he can trust to find her before it is too late. What's done cannot be undone…"

Gabriel Allon, the legendary chief of Israeli intelligence, has spent most of his life fighting terrorists, including the murderous jihadists financed by Saudi Arabia. Prince Khalid—or KBM, as he is known—has pledged to finally break the bond between the kingdom and radical Islam. For that reason alone, Gabriel regards him as a valuable if flawed partner. Together they will become unlikely allies in a deadly secret war for control of the Middle East. The life of a child, and the throne of Saudi Arabia, hang in the balance. Both men have made their share of enemies. And both have everything to lose.

Filled with dark humor, breathtaking twists of plot and an unforgettable cast of characters, The New Girl is both a thrilling, page-turning tale of entertainment and a sophisticated study of political alliances and great-power rivalries in a dangerous world. And it is once again proof that Gabriel Allon is "one of fiction's greatest spies" (Kirkus) and Daniel Silva is "quite simply the best" (Kansas City Star) writer of foreign intrigue and suspense at work today.

About the Author
He has been called his generation's finest writer of international intrigue and one of the greatest American spy novelists ever. Compelling, passionate, haunting, brilliant: these are the words that have been used to describe the work of award-winning #1 New York Times bestselling author Daniel Silva.

Silva knew from a very early age that he wanted to become a writer, but his first profession was journalism. Born in Michigan, raised and educated in California, he was pursuing a master's degree in international relations when he received a temporary job offer from United Press International to help cover the 1984 Democratic National Convention in San Francisco. Later that year Silva abandoned his studies and joined UPI full time, working first in San Francisco, then on the foreign desk in Washington and finally as Middle East correspondent in Cairo and the Persian Gulf. In 1987, while covering the Iran-Iraq war, he met NBC Today National Correspondent Jamie Gangel and they were married later that year. Silva returned to Washington and went to work for CNN and became Executive Producer of its talk show unit including shows like Crossfire, Capital Gangand Reliable Sources.

In 1995, Silva confessed to Jamie that his true ambition was to be a novelist. With her support and encouragement, he secretly began work on the manuscript that would eventually become the instant bestseller The Unlikely Spy. He left CNN in 1997 after the book's successful publication and began writing full time. Since then, all of Silva's books have been New York Times and international bestsellers. His books have been translated in to more than 30 languages and they are published around the world. He is currently at work on a new novel and warmly thanks all those friends and loyal readers who have helped to make his books such an amazing success.

About the Moderator
Jamie Gangel is an award-winning television correspondent. For more than 30 years she worked as National Correspondent for NBC's Today show; in 2015, she joined CNN as Special Correspondent covering politics. Among her many exclusives, Gangel has profiled President George H.W. Bush, Bill Clinton, George W. Bush, Gerald Ford, Barack Obama and Donald Trump. In the arts, Gangel has interviewed Hollywood stars including Sean Connery, Barbara Streisand, Tom Hanks, Clint Eastwood and Harrison Ford. She is married to Daniel Silva. The couple lives in Florida with their twins Lily and Nicholas.

The event is held in partnership with Books Inc.