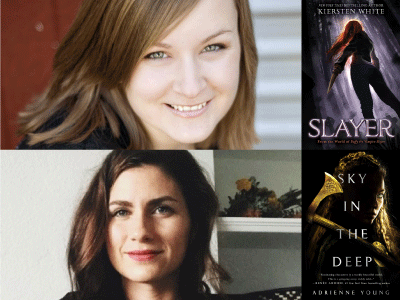 Not Your Mother's Book Club presents New York Times-bestselling author Kiersten White in celebration of Slayer--book one in her brand-new series set in the world of Buffy the Vampire Slayer. Kiersten will be in conversation with Adrienne Young, author of the much-buzzed debut fantasy Sky in the Deep.

About Slayer: Into every generation a Slayer is born...
Nina and her twin sister, Artemis, are far from normal. It's hard to be when you grow up at the Watcher's Academy, which is a bit different from your average boarding school. Here teens are trained as guides for Slayers--girls gifted with supernatural strength to fight the forces of darkness. But while Nina's mother is a prominent member of the Watcher's Council, Nina has never embraced the violent Watcher lifestyle. Instead she follows her instincts to heal, carving out a place for herself as the school medic.
Until the day Nina's life changes forever.
Thanks to Buffy, the famous (and infamous) Slayer that Nina's father died protecting, Nina is not only the newest Chosen One--she's the last Slayer, ever. Period.
As Nina hones her skills with her Watcher-in-training, Leo, there's plenty to keep her occupied: a monster fighting ring, a demon who eats happiness, a shadowy figure that keeps popping up in Nina's dreams...
But it's not until bodies start turning up that Nina's new powers will truly be tested--because someone she loves might be next.
One thing is clear: Being Chosen is easy. Making choices is hard.
About Sky in the Deep: A 2018 Most Anticipated Young Adult book that is part Wonder Woman, part Vikings--and all heart.
OND ELDR. BREATHE FIRE.
Raised to be a warrior, seventeen-year-old Eelyn fights alongside her Aska clansmen in an ancient, rivalry against the Riki clan. Her life is brutal but simple: fight and survive. Until the day she sees the impossible on the battlefield--her brother, fighting with the enemy--the brother she watched die five years ago.
Faced with her brother's betrayal, she must survive the winter in the mountains with the Riki, in a village where every neighbor is an enemy, every battle scar possibly one she delivered. But when the Riki village is raided by a ruthless clan thought to be a legend, Eelyn is even more desperate to get back to her beloved family.
She is given no choice but to trust Fiske, her brother's friend, who sees her as a threat. They must do the impossible: unite the clans to fight together, or risk being slaughtered one by one. Driven by a love for her clan and her growing love for Fiske, Eelyn must confront her own definition of loyalty and family while daring to put her faith in the people she's spent her life hating.
Event date:
Thursday, January 10, 2019 - 7:00pm
Event address:
Books Inc.
74 Town & Country Village
Palo Alto, CA
YA @ Books Inc:
Peninsula Events
South Bay
Books: