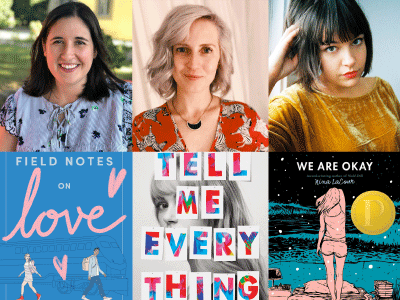 Not Your Mother's Book Club presents bestselling author Jennifer E. Smith in celebration of her poignant new novel, Field Notes on Love. Joining Jennifer will be Sarah Enni, author of the engaging and lively debut, Tell Me Everything. This event will be moderated by Nina LaCour, author of the Michael L. Printz Award-winning novel We Are Okay. Plus! Sarah Enni will be holding a live recording of this event for her First Draft podcast, where she encourages other writers to spill their juicy secrets.

About Field Notes on Love: The bestselling author of Windfall and The Statistical Probability of Love at First Sight returns with a meet-cute romance about Hugo and Mae, two teens who are thrown together on a cross-country train trip that will teach them about love, each other, and the futures they can build for themselves.
It's the perfect idea for a romantic week together: traveling across America by train.
But then Hugo's girlfriend dumps him. Her parting gift: the tickets for their long-planned last-hurrah-before-uni trip. Only, it's been booked under her name. Nontransferable, no exceptions.
Mae is still reeling from being rejected from USC's film school. When she stumbles across Hugo's ad for a replacement Margaret Campbell (her full name!), she's certain it's exactly the adventure she needs to shake off her disappointment and jump-start her next film.
A cross-country train trip with a complete stranger might not seem like the best idea. But to Mae and Hugo, both eager to escape their regular lives, it makes perfect sense. What starts as a convenient arrangement soon turns into something more. But when life outside the train catches up to them, can they find a way to keep their feelings for each other from getting derailed?
About Tell Me Everything: Your secret's safe...until it's not.
Ivy's always preferred to lay low, unlike her best friend Harold, who has taken up a hundred activities as sophomore year begins. But Ivy has her own distraction: the new anonymous art-sharing app, VEIL.
Being on the sidelines has made Ivy a skilled observer, and soon she discovers that some of the anonymous posters are actually her classmates. While she's still too scared to put her own creations on the app, Ivy realizes that she can contribute in an even better way -- by making gifts for the artists she's discovered. The acts of kindness give her such a rush that, when Ivy suspects Harold is keeping a secret, she decides to go all in. Forget gifts -- Harold needs a major party.
But when her good intentions thrust her into the spotlight, Ivy's carefully curated world is thrown into chaos. Now she has to find the courage to stand out... or risk losing everything and everyone she loves most.

About We Are Okay: You go through life thinking there's so much you need. . . . Until you leave with only your phone, your wallet, and a picture of your mother. Marin hasn't spoken to anyone from her old life since the day she left everything behind. No one knows the truth about those final weeks. Not even her best friend Mabel. But even thousands of miles away from the California coast, at college in New York, Marin still feels the pull of the life and tragedy she's tried to outrun. Now, months later, alone in an emptied dorm for winter break, Marin waits. Mabel is coming to visit and Marin will be forced to face everything that's been left unsaid and finally confront the loneliness that has made a home in her heart.

We Are Okay (Hardcover)

Tell Me Everything (Hardcover)