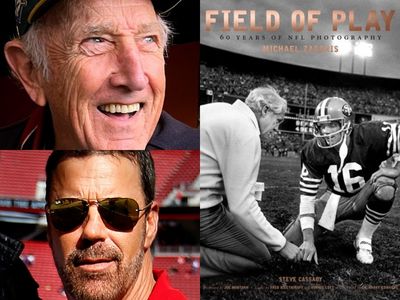 Books Inc. Palo Alto presents rock n' roll and sports photographer Michael Zagaris for a introduction to his new book Field of Play, a striking celebration of decades of unparalleled access to the NFL!

For the past 60 years, Michael Zagaris has taken his camera behind the scenes of the NFL, capturing the moments that define America's game. With unparalleled access--42 Super Bowls, 49 seasons as team photographer for the San Francisco 49ers, and a behind-the-scenes passport to the rest of the NFL--Zagaris takes his aim beyond the field and to the locker room, the bench, the practices, and the training camps. His intimate portraits convey the nerves, the tension, the pain, and the elation with emotional depth and the clarity of a longtime insider. With contributions from celebrated Hall of Famers Joe Montana, Ronnie Lott, and Fred Biletnikoff, as well as text from renowned sportswriter Steve Cassady and sociologist Dr. Harry Edwards, Field of Play highlights Zagaris's storied career as a photographer, showcasing the irresistible force of football and celebrates its enduring presence.

Tim Ryan is currently the radio analyst for the San Francisco 49ers on KNBR 104.5/680, and previously and NFL analyst for Fox television. A two-time All-American (1988,1989) at University of Southern California, Ryan is the all-time leading tackler in school history. Ryan was a third-round draft choice in the 1990 NFL draft and played for the Chicago Bears from 1990-1993.