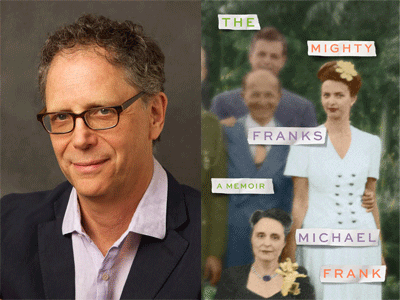 Short story writer, essayist, and former Los Angeles Times book critic Michael Frank discusses his fascinating memoir, The Mighty Franks. Micahel will be in conversation with Lindsey Crittenden, author of The Water Will Hold You: A Skeptic Learns to Pray.

About The Mighty Franks: "My feeling for Mike is something out of the ordinary," Michael Frank overhears his aunt say to his mother when he is a boy. "I wish he were mine."

Michael's childless Auntie Hankie and Uncle Irving, glamorous Hollywood screenwriters, are doubly his aunt and uncle--brother and sister married sister and brother. The two families live just blocks away from each other in Laurel Canyon. In this strangely intertwined family, even the author's two grandmothers share an apartment together.

Talented, sparkling, and lavish with her money, attention, and love, Auntie Hankie takes charge of Michael's education, showing him which books to read, which painters to admire, which houses to like, which people to adore. She literally trains his eye--until that eye wants to see on its own.

As his aunt's moods begin to darken, it becomes apparent that beneath her magical exterior there lies a dangerous rage. His aunt stages a series of tumultuous scenes that devastate Michael, forcing him to reconstruct both himself and his family narrative as he tries to reconcile the woman he once cherished with the troubled figure he discovers her to be.

The Mighty Franks is a psychologically acute memoir that asks each of us where the boundaries of family life should be drawn, and who should draw them.