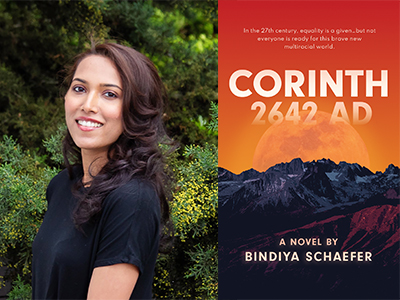 Stop by Books Inc. Mountain View between 1:00 PM and 2:00 PM for a special Meet-And-Greet Booksigning with local writer Bindiya Schaefer in celebration of her debut novel, Corinth 2642 AD.

In the year 2642, no one person is ethnically like the other. Globalization, war, and other catalysts have given birth to a diverse and multi-ethnic new world.

Not everyone feels this new society is ideal, though. A select group of seven colonies-a pureblood, white supremacist cult complete with arranged marriages and heavily guarded borders-have only had one mission: protect the bloodline from contamination and produce the next generation of survivors. But some young people, destined for a life without choices, make a run for it, including Cara, the granddaughter of Julius Bull, the colonies' leader.

Desperate to keep her dissidence quiet for fear of potentially inciting a power struggle within the colonies, Bull brings in Jimmy Matoo-a Special Investigator from San Francisco whose brother was found dead near one of the colonies the same night Cara disappeared. For Matoo, the visit to Corinth, Oregon, is eye-opening. He has never seen a white person before and is shocked by their ideas of imperialism, racial purity, and the prospect of arranged marriages in the 27th century. His investigation reveals that dozens of young colony members have gone missing over the years, and some have been found dead on the outskirts of Corinth.

With the clock ticking, San Francisco's Detective Matoo's missing persons investigation soon becomes a fight for survival-turns out the residents don't like a brown fellow in their midst. Can he find Cara, figure out what happened to his brother, and save the leader's family from the Cabal before it's too late? Maybe. But first, he must find out who in the colony has the means and connections to smuggle the dissidents out without being detected because it could be the difference between life and death.

Bindiya is a former defense and aerospace journalist. Before moving to the San Francisco Bay Area, she lived in Dubai, UAE and Bangalore, India.