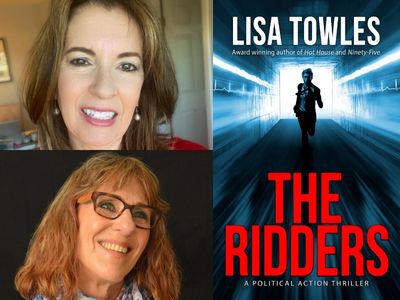 Crime novelist Lisa Towles returns to Books Inc. Alameda for the launch of her forthcoming political thriller, The Ridders, and will be joined by fellow author and friend Ana Manwaring!

Brock "BJ" Janoff and his older brother Jonas run a private investigation firm in Venice, CA. BJ is randomly approached by a stranger on the street with a proposition he can't refuse - one million dollars to deliver a single envelope to a hotel lobby.

They pay him up front, which sounds good on the surface, but now BJ's life is in danger if he doesn't deliver the envelope in time. Obsessed with the envelope's contents and the "why me", BJ follows clues to investigate the players behind what he believes is an organized crime scam. When an act of brilliance changes the balance of power, the safety of everyone he loves is in jeopardy. And the more he digs, the closer he gets to truths he can't bear to face - about the elusive Bilderberg Group, his missing father, and about the fate of everyone he loves.

Lisa Towles is an award-winning crime novelist and a passionate speaker on the topics of fiction writing, creativity, and Strategic Self Care. Lisa has seven crime novels in print with a new title forthcoming in June of 2022. Her latest thriller, Ninety-Five, was released in November 2021 and won a Literary Titan Award for Fiction. Her 2019 thriller, The Unseen, was the Winner of the 2020 NYC Big Book Award in Crime Fiction, and a Finalist in the Thriller category of the Best Book Awards by American Book Fest. Her 2017 thriller, Choke, won a 2017 IPPY and a 2018 NYC Big Book Award for Thriller. Lisa is an active member and frequent panelist/speaker of Mystery Writers of America, Sisters in Crime, and International Thriller Writers. She has an MBA in IT Management and works full-time in the tech industry in the San Francisco Bay Area.

Ana Manwaring is the author of the JadeAnne Stone Mexico Adventures: Set Up , The Hydra Effect, Nothing Comes after Z, and Coyote. Her  memoir  of living in Mexico, Saints and Skeletons will be released in the spring of 2023. Ana founded JAM Manuscript Consulting and is a veteran Sisters in Crime NorCal board member. When she’s not writing suspense thrillers, she produces the North Bay Poetics, a monthly poetry event, and teaches creative writing in Wine Country. Read about her experiences in Mexico and find reviews of favorite authors and more at  www.anamanwaring.com.