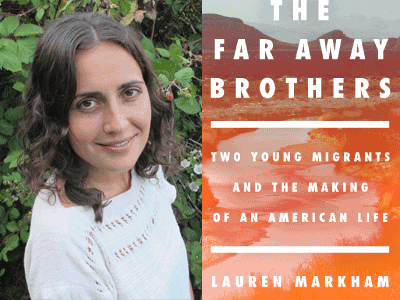 With writing featured in QR, VICE, Orion, Pacific Standard, Guernica, The New Yorker.com, on This American Life, and elsewhere, journalist Lauren Markham discusses her brilliant debut book, The Far Away Brothers: Two Young Migrants and the Making of an American Life. Lauren will be in conversation with Thi Bui, author of the national bestseller The Best We Could Do: An Illustrated Memoir.

About The Far Away Brothers: The deeply reported story of identical twin brothers who escape El Salvador's violence to build new lives in California--fighting to survive, to stay, and to belong.

Growing up in rural El Salvador in the wake of the civil war, Ernesto Flores had always had a fascination with the United States, the distant land of skyscrapers and Nikes, while his identical twin, Raul, never felt that northbound tug. But when Ernesto ends up on the wrong side of the region's brutal gangs he is forced to flee the country, and Raul, because he looks just like his brother, follows close behind--away from one danger and toward the great American unknown.

In this urgent chronicle of contemporary immigration, journalist Lauren Markham follows the seventeen-year-old Flores twins as they make their harrowing journey across the Rio Grande and the Texas desert, into the hands of immigration authorities, and from there to their estranged older brother's custody in Oakland, CA. Soon these unaccompanied minors are navigating a new school in a new language, working to pay down their mounting coyote debt, and facing their day in immigration court, while also encountering the triumphs and pitfalls of life as American teenagers--girls, grades, Facebook--with only each other for support. With intimate access and breathtaking range, Markham offers a coming of age tale that is also a nuanced portrait of Central America's child exodus, an investigation of U.S. immigration policy, and an unforgettable testament to the migrant experience.

About The Best We Could Do: An intimate and poignant graphic novel portraying one family's journey from war-torn Vietnam, from debut author Thi Bui.

This beautifully illustrated and emotional story is an evocative memoir about the search for a better future and a longing for the past. Exploring the anguish of immigration and the lasting effects that displacement has on a child and her family, Bui documents the story of her family's daring escape after the fall of South Vietnam in the 1970s, and the difficulties they faced building new lives for themselves.

At the heart of Bui's story is a universal struggle: While adjusting to life as a first-time mother, she ultimately discovers what it means to be a parent--the endless sacrifices, the unnoticed gestures, and the depths of unspoken love. Despite how impossible it seems to take on the simultaneous roles of both parent and child, Bui pushes through. With haunting, poetic writing and breathtaking art, she examines the strength of family, the importance of identity, and the meaning of home.

In what Pulitzer Prize-winning novelist Viet Thanh Nguyen calls "a book to break your heart and heal it," The Best We Could Do brings to life Thi Bui's journey of understanding, and provides inspiration to all of those who search for a better future while longing for a simpler past.

The Far Away Brothers: Two Young Migrants and the Making of an American Life (Hardcover)

The Best We Could Do: An Illustrated Memoir (Hardcover)