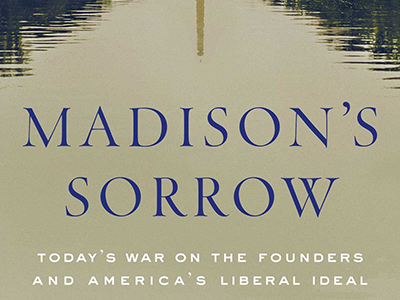 Center for the Study of Democracy at the University of California, Irvine research fellow Kevin O'Leary discusses his critically acclaimed work, Madison's Sorrow: Today's War on the Founders and America's Liberal Ideal. Kevin will be joined in conversation by the journalist, poet, and author Steven M. Thomas.

"O'Leary could not be more timely..." --Norman Ornstein

"This beautifully written book is a must-read..." --Erwin Chemerinsky

An eye-opening cultural history of the political revolution that has destroyed the Republican Party and unleashed an illiberal crusade against the ideals of the Founding Fathers.

The story of America is the struggle between our liberal ideal and illiberal resistance. Donald Trump catalyzed a reactionary revolution by tapping into the dark, shadowy side of American democracy that embraces exclusion and inequality. Throughout American history these alarming impulses have come to the forefront of our culture--during the Civil War, the era of the Robber Barons, and the Civil Rights Movement--but have now come to fruition in the presidency of Donald Trump.

Arguing that the contemporary Republican Party is waging a counterrevolution against the core beliefs of the nation, journalist and scholar Kevin C. O'Leary cracks open American history to reveal the essence of America's liberal heritage by critiquing the reactionary illiberal currents that periodically threaten American democracy. American politics is no longer an ongoing debate between liberals and conservatives because the new Republican Party embraces the feudal values of the Old World. While there are millions of conservatives in the population, the elected leadership of the GOP is deeply reactionary.

Today's marriage of white-identity Southerners and their northern allies to moneyed libertarians is no run-of-the-mill political partnership. Instead, it is extraordinarily dangerous. Clearly, conservatives have lost their party. And without conservatives debating liberals in an intellectual, respectful manner to address the nation's problems, Madisonian democracy breaks down.

A stimulating reinterpretation of the American experience, Madison's Sorrow exposes the intellectual and moral deficiencies of the illiberal right while offering a robust defense of the liberal tradition.