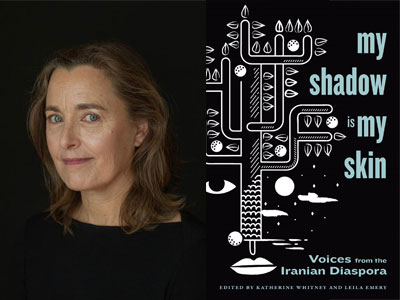 *This event has been canceled with the plan to reschedule at a later date. Our apologies for the inconvenience.*

The Iranian revolution of 1979 launched a vast, global diaspora, with many Iranians establishing new lives in the United States. In the four decades since, the diaspora has expanded to include not only those who emigrated immediately after the revolution but also their American-born children, more recent immigrants, and people who married into Iranian families, all of whom carry their own stories of trauma, triumph, adversity, and belonging that reflect varied and nuanced perspectives on what it means to be Iranian or Iranian American. The essays in My Shadow Is My Skin are these stories.

This collection brings together thirty-two authors, both established and emerging, whose writing captures the diversity of Iranian diasporic experiences. Reflecting on the Iranian American experience over the past forty years and shedding new light on themes of identity, duality, and alienation in twenty-first-century America, the authors present personal narratives of immigration, sexuality, marginalization, marriage, and religion that offer an antidote to the news media's often superficial portrayals of Iran and the people who have a connection to it. My Shadow Is My Skin illuminates a community that rarely gets to tell its own story.

My Shadow Is My Skin: Voices from the Iranian Diaspora (Hardcover)