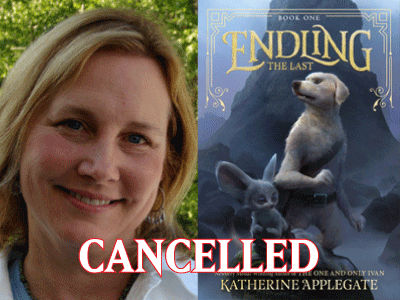 This event has been cancelled and we are working on rescheduling. Apologies for any inconveniences this may cause you.

I REMEMBERED
with a sudden pang, my mother's words the last time we were together: It's never wrong to hope, Byx.

Of course, she'd also said: Unless the truth says otherwise.

Byx is used to being the youngest and the smallest. But for all her life, she's also been part of something bigger--part of a family, part of a pack. Until the terrible day Byx finds herself alone, the last of the dairnes. The endling.

For dairnes, the pack is everything: root and branch, heart and soul. Byx is determined to see if the legends she's heard over the years about others of her kind are true. She sets off on a quest, traveling through the war-torn kingdom of Nedarra. Along the way, she meets new allies who each have their own motivation for joining her: Tobble, the worthy wobbyk; Khara, the girl of many disguises; Renzo, the thief with honor; and Gambler, the principled felivet.

They start as Byx's friends and become her family, and together they uncover a secret that will threaten the existence of not just the dairnes but every other creature in their world.