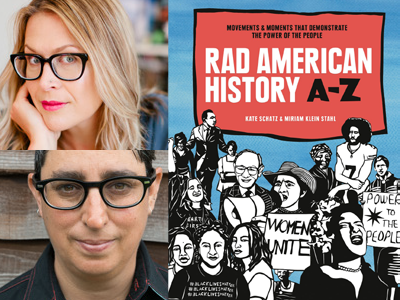 Rad author and illustrator team Kate Schatz and Miriam Klein Stahl return to Books, Inc. in Alameda to celebrate the launch of their latest book, Rad American History A-Z. Each letter of the alphabet tells the story of a significant moment in America’s progressive history – one that isn’t always covered in history classes. (Ages 8+)

"An engaging, fascinating, and necessary book that speaks truth to power."--Congresswoman Barbara Lee

In Rad American History A-Z, each letter of the alphabet tells the story of a significant moment in America's progressive history--one that isn't always covered in history classes: A is for Alcatraz, and the Native occupation of 1969; C is for the Combahee River Raid, a Civil War action planned in part by Union spy Harriet Tubman; Z is for Zuccotti Park, and the Occupy movement that briefly took over the world.

There are tales of triumph, resilience, creation, and hope. Each engaging, fact-filled narrative illustrates an eye-opening moment that shows us how we got to now--and what we need to know about our histories to create a just and sustainable future.