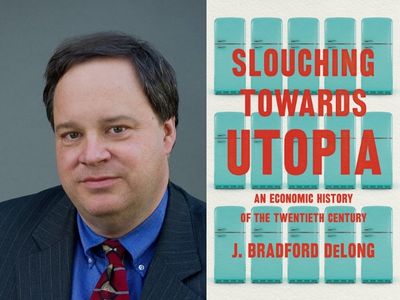 From one of the world's leading economists, a grand narrative of the century that made us richer than ever, yet left us unsatisfied

Before 1870, humanity lived in dire poverty, with a slow crawl of invention offset by a growing population. Then came a great shift: invention sprinted forward, doubling our technological capabilities each generation and utterly transforming the economy again and again. Our ancestors would have presumed we would have used such powers to build utopia. But it was not so. When 1870-2010 ended, the world instead saw global warming; economic depression, uncertainty, and inequality; and broad rejection of the status quo.

Economist Brad DeLong's Slouching Towards Utopia tells the story of how this unprecedented explosion of material wealth occurred, how it transformed the globe, and why it failed to deliver us to utopia. Of remarkable breadth and ambition, it reveals the last century to have been less a march of progress than a slouch in the right direction.

"An intellectually exciting and entertaining gallop along the arc of twentieth-century economic history. Brad DeLong puts together the puzzle of the past to tell a story of remarkable achievements as well as setbacks. A great way to understand the forces that have shaped the world today."
-- Minouche Shafik, director, London School of Economics and Political Science

"The period 1870-2010--what Brad DeLong calls the 'long twentieth century'--saw the world break decisively free of its Malthusian chains, with levels of per capita economic growth without any parallel in human history. This wonderfully researched and written book explains the roots of this vertiginous ascent towards utopia, while also exposing the causes of the subsequent flat-lining in our economic fortunes and what action is now needed to ensure the long century is viewed by future historians as the historical rule, not the exception."
-- Andrew G. Haldane, former chief economist, Bank of England

"Brad DeLong manages brilliantly to combine detailed analysis of a huge sweep of global history with an accessible and engaging narrative. The result is a book full of well-founded and penetrating insights that will appeal to anyone interested in the causes and consequences of modern economic growth."
-- Robert C. Allen, distinguished professor of economic history, New York University, Abu Dhabi, and senior research fellow, Nuffield College, Oxford

"This is a brilliant and important book. It offers an original and penetrating analysis of what its author calls 'the long twentieth century, ' the period of unprecedented economic advance that began roughly in 1870 and ended, he asserts, in 2010. Material abundance poured upon humanity. Previous generations would have thought such wealth to be a guarantee of utopia. Yet the age of material progress has ended not in a utopia, but in recrimination and discord. No book has explained the successes and failures of this extraordinary period with comparable insight."-- Martin Wolf, chief economics commentator, Financial Times

"Brad DeLong learnedly and grippingly tells the story of how all the economic growth since 1870 has created a global economy that today satisfies no one's ideas of fairness. The long journey toward economic justice and more equal rights and opportunities for all shall and will continue."

"What a joy to finally have Brad DeLong's masterful interpretation of twentieth-century economic history down on paper. Slouching Towards Utopia is engaging, important, and awe-inspiring in its breadth and creativity."
-- Christina Romer, University of California, Berkeley

"History provides the only data we have for charting a course forward in these turbulent times. I have not seen a more revealing and illuminating book about economics and what it means in a very long time. Slouching Towards Utopia should be required reading for anybody who cares about the future of the global system, and that should be everyone."
-- Lawrence H. Summers, Harvard University

"A magisterial history...asks the right questions and teaches us a lot of crucial history along the way." -- Paul Krugman

"The author conveys a wealth of information in elegant, accessible prose, combining grand, epochal perspectives with fascinating discursions on everything from alternating-current electricity to the gender wage gap. The result is a cogent interpretation of economic modernity that illuminates both its nigh-miraculous achievements and its seething discontents."-- Publishers Weekly, starred review

"[T]he author ably anatomizes his subject with admirable clarity, offering accessible and illuminating explanations of key historical shifts and the socio-economic forces driving them... A sprawling but carefully argued, edifying account of modern economic history and its impact on global well-being." -- Kirkus Reviews

"An unmissable book ... The strength of the book--as well as its immense scope and depth ... is that it's a work of political economy, braiding the different strands of ideas, Hayek, Polanyi and Keynes ... Definitely one to read."-- Diane Coyle

J. Bradford DeLong, an economic historian, is a professor of economics at the University of California, Berkeley. He was a deputy assistant secretary of the U.S. Treasury during the Clinton administration. He writes a widely read economics blog, now at braddelong.substack.com. He lives in Berkeley, California.

Slouching Towards Utopia: An Economic History of the Twentieth Century (Hardcover)