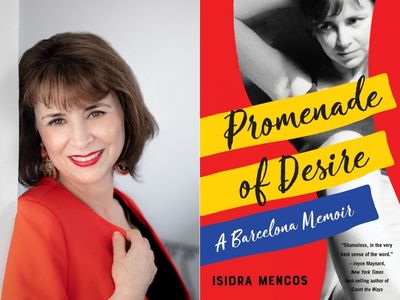 Promenade of Desire narrates Mencos' journey from repression to liberation in tandem with Spain’s transition from dictatorship to democracy. As the country transforms itself, the shy María Isidra evolves into the alluring Isadora, whose passion for books and salsa dancing sustains her as she discovers what it means to be lustful and loved, and reclaims her whole self.

María Isidra is a proper Catholic girl raised in 1960s Spain by a strong matriarch during a repressive dictatorship. Early sexual trauma and a hefty dose of fear keep her in line for much of her childhood, but also lead her to live a double life. In her home, there is no discussing the needs of her growing body. In the street, kissing in public is forbidden.

Upon the dictator’s death in 1975, Spain bursts wide open, giving way to democracy and a cultural revolution. Barcelona’s vibrant downtown and its new freedoms seduce María Isidra. She dives into a world of activism, communal living, literature, counterculture, open sexuality, and alcohol.

“A brave and unblinkingly honest portrait of a young woman’s sensual and sexual awakening in the face of censure and repression, and her refusal to be held back by the constraints of her family, culture, and religion. The same joyful spirit that expresses itself in Mencos’ love of dancing shines through in her story of her own personal dance into a brave new world beyond the one her mother prescribed for her. Her story is shameless, in the very best sense of the word.”
—Joyce Maynard, New York Times best-selling author of Labor Day, To Die For, and  Count The Ways

“A lush memoir and richly detailed exploration of a pivotal era in Spain.”

“Desire drives both art and life, and Isidra Mencos's memoir pulses and glows with it. Her prismatic exploration of desire reveals everything desire can be, from natural, alive, and free to shamed, broken, and destructive to tenderly and determinedly reclaimed. Mencos excavates her most intimate experiences of becoming whole with the unflinching scrutiny of a scientist, the boundless curiosity of a child, and the astute devotion of an artist.”

—Jeannine Ouellette, award-winning author of The Part That Burns

“Promenade of Desire is many things at once: a page-turning coming-of-age tale, a gutsy examination of family, a vivid portrait of a vanished time and a place, and a profound meditation on the nature of desire. Mencos is a sure-handed, open-hearted storyteller whose yearnings reflect our own.”

—Aaron Shulman, author of The Age of Disenchantments: The Epic Story of Spain’s Most Notorious Literary Family and the Long Shadow of the Spanish Civil War

“Promenade of Desire sets the author’s sexual coming-of-age story against Spain’s sexual and political awakening in a unique and intriguing pairing.”

“Mencos takes readers on her compelling, personal journey of rebellion against the backdrop of her country’s evolution to democracy. Fighting against family, tradition, and society’s expectations of women, she ultimately triumphs.”

—Andrea Jarrell, author of I’m the One Who Got Away

Isidra Mencos was born and raised in Barcelona. She spent her twenties experimenting with the new freedoms afforded by the end of Franco's dictatorship in Spain, bouncing from man to man and job to job while immersing herself in books and dancing. She freelanced for prestigious publishing houses, traveled the world as a tour leader, and worked for the Olympic Committee. In 1992 she moved to the US to earn a PhD in Spanish and Latin American contemporary literature at UC Berkeley, where she taught for twelve years. She also developed her own business as a writer and editor for Spanish-speaking media. From 2006 to 2016 she worked as Editorial Director of the Americas for BabyCenter, the leading global digital resource for parents, and managed teams in several countries. In 2016 she quit her job to dedicate herself to writing. Her work has appeared in The Chicago Quarterly Review, Front Porch Journal, The Penmen Review, WIRED, The Huffington Post, and Better After Fifty among others. Her essay "My Books and I" was listed as Notable in The Best American Essays Anthology. Today Isidra lives in Northern California with her husband and son.