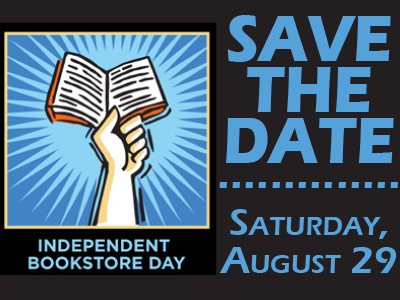 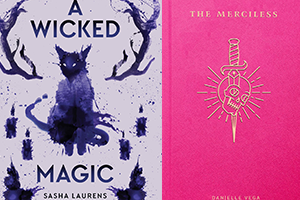 1:00 PM (PST) YA @ Books Inc proudly presents Sasha Laurens in celebration of her much-buzzed fantasy debut, A Wicked Magic. The Chilling Adventures of Sabrina meets The Craft when modern witches must save teens stolen by an ancient demon in this YA fantasy-thriller debut. Sasha will be in conversation with Danielle Vega, author of The Merciless Series.
Dan and Liss are witches. The Black Book granted them that power. Harnessing that power feels good, especially when everything in their lives makes them feel powerless.
During a spell gone wrong, Liss's boyfriend is snatched away by an evil entity and presumed dead. Dan and Liss's friendship dies that night, too. How can they practice magic after the darkness that they conjured?
Months later, Liss discovers that her boyfriend is alive, trapped underground in the grips of an ancient force. She must save him, and she needs Dan and the power of The Black Book to do so. Dan is quickly sucked back into Liss's orbit and pushes away her best friend, Alexa. But Alexa has some big secrets she's hiding and her own unique magical disaster to deal with.
When another teenager disappears, the girls know it's no coincidence. What greedy magic have they awakened? And what does it want with these teens it has stolen?
Set in the atmospheric wilds of California's northern coast, Sasha Laurens's thrilling debut novel is about the complications of friendship, how to take back power, and how to embrace the darkness that lives within us all. 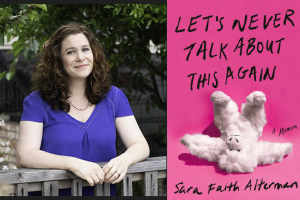 *Registration is required. Click here to RSVP*
3:00 PM (PST) Producer and writer Sara Faith Alterman shares her darkly funny and poignant memoir, Let's Never Talk About This Again. Twelve-year-old Sara enjoyed an G-rated existence in suburban New England, filled with over-the-top birthday cakes, Revolutionary War reenactments, and nerdy word games invented by her prudish father, Ira. But Sara’s world changed for the icky when she discovered that Ira had been shielding her from the truth: that he was a campy sex writer who’d sold millions of books in multiple languages, including the wildly popular Games You Can Play with Your Pussy. Which was, to the naïve Sara’s horror, not a book about cats. For decades the books remained an unspoken family secret, until Ira developed early onset Alzheimer’s disease . . . and announced he’d be reviving his writing career. With Sara’s help.

In this cringeworthy, hilarious, and moving memoir, Sara shares the profound experience of discovering new facets of her father; once as a child, and again as an adult. Let’s Never Talk About This Again is a must-read confessional from a woman who spent years trying to find humor in the perverse and optimism in the darkness, and succeeded. 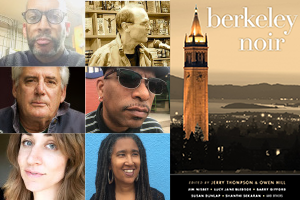 Berkeley brings its own unique blend of Bay Area noir, complementing the grit and grime that preceded it in San Francisco Noir and Oakland Noir.

From the introduction: A town named after a British philosopher doesn't exactly evoke visions of Goodis or Highsmith. Grifters? Dames? Cops? In Berkeley? On the surface the alleys don't seem that dark, until we look a little closer. Possibly the most iconic visual image of Berkeley does involve cops. It's the film with Mario Savio, atop a police car, declaring, "There's a time when the operation of the machine becomes so odious, makes you so sick at heart, that you can't take part!" Now there's a statement that sums up the spirit of noir.

Berkeley Noir asks, If not here, where? When pulling together this outstanding list of authors, we were constantly reminded of Berkeley's rich literary history, one that swerves through varying shades of noir. Those who helped pave the way for this collection include Anthony Boucher, Janet Dawson, Margaret Cuthbert, Ellen Gilchrist, Linda Grant, Jonathan Lethem, and Barry Gifford. There will always be a place in the heart of this city where even outcasts can feel at home...The search through darkness for an authentic, eclectic voice is the most important ingredient in the rich stew that is Berkeley, California. 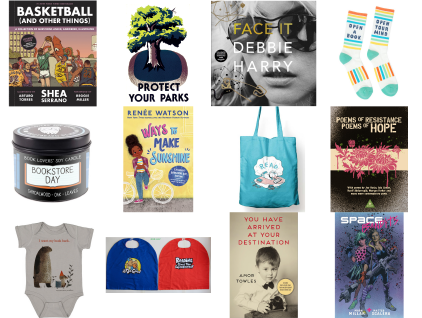 Exclusive Items! Created for Independent Bookstore Day 2020, these items will be available for purchase on a first-come, first-served basis at Books Inc. locations on August 29th. These exclusive items can only be purchased directly from indie bookstores. Please Note: Supplies are limited and vary depending on store location. Orders will be fulfilled on a first-come, first-served basis. We will notify you of your order status as soon as possible, but processing time may vary.

From top left: SIGNED SPECIAL EDITION BASKETBALL (AND OTHER THINGS) with exclusive mystery poster included by SHEA SERRANO; THE ART OF PROTEST POSTCARDS by JO RIBBON In Collaboration with AMNESTY INTERNATIONAL; EXCLUSIVE DOUBLE VINYL ALBUM OF FACE IT: A MEMOIR by DEBBIE HARRY; OPEN A BOOK, OPEN YOUR MIND SOCKS from OUT OF PRINT CLOTHING; BOOKSTORE DAY CANDLE by FROSTBEARD STUDIOS AND IBD PUBLISHING; EXCLUSIVE BOOKSTORE DAY EDITION FEATURING A LETTER FROM THE AUTHOR WAYS TO MAKE SUNSHINE by RENÉE WATSON; NOT QUITE NARWHAL KIDS TOTE by JESSIE SIMA; POEMS OF RESISTANCE, POEMS OF HOPE WITH POEMS OF HOPE BY JOY HARJO, ADA LIMON, HANIF ABDURRAQUIB, MORGAN PARKER, AND MANY OTHER CONTEMPORARY POETS; GIVE ME BACK MY BOOK ONESIE by JON KLASSEN; REVERSIBLE SUPA CAPE by DAV PILKEY; A SIGNED SHORT STORY NEVER BEFORE IN PRINT YOU HAVE ARRIVED AT YOUR DESTINATION by AMOR TOWLES; SPACE BANDITS ISSUES 1-5 SPECIAL EDITION WITH EXCLUSIVE COVER AND VINYL STICKER by MARK MILLAR/MATTEO SCALERA. 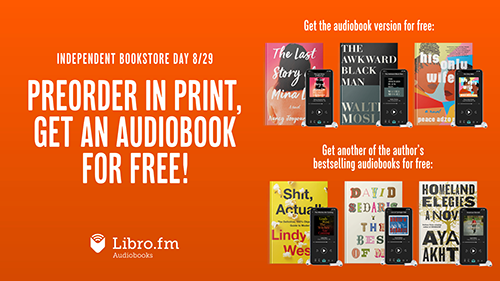 Pre-order in print, get an audiobook for FREE courtesy of our partners at Libro.fm. On August 29, simply purchase any of the below forthcoming titles and send a quick email to Libro.fm with your proof of purchase.

Pre-order any of these forthcoming titles in hardcover, and get the audiobook version for free!
•The Last Story of Mina Lee by Nancy Jooyoun Kim (on sale: 9/1)
• His Only Wife by Peace Adzo Medie (on sale: 9/1)
• The Awkward Black Man: Stories by Walter Mosely (on sale: 11/10)
Pre-order any of these forthcoming titles in hardcover, and get a bestselling audiobook from the author for free!
• Shit, Actually by Lindy West (on sale: 10/20)
Free Audiobook: The Witches are Coming
• The Best of Me by David Sedaris (on sale: 11/3)
Free audiobook: Live at Carnegie Hall
• Homeland Elegies by Ayad Akhtar (on sale: 9/15)
Free audiobook: American Dervish
How it works: Receipts must include a purchase date of August 29th, 2020. No limit on the number of print books purchased and free audiobooks collected. You will receive your free audiobook(s) within 24 hours of emailing hello@libro.fm, except for audiobooks that are not yet published, which you will receive on the listed pub date. The deadline to submit receipts is Monday, August 31st, 2020.
Event date:
Saturday, August 29, 2020 - 9:00am
Event address:
Your Local Books Inc. ~ In-store & Online
SF, East Bay, Peninsula, South Bay
CA
Just for Kids
YA @ Books Inc:
San Francisco Events
East Bay Events
Peninsula Events
South Bay
............