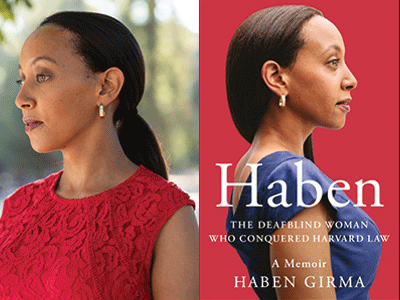 If you need disability accommodations, please contact Schyler Baker or Nick Mamatas at the store, 510-525-7777.

"This autobiography by a millennial Helen Keller teems with grace and grit." -- O Magazine
"A profoundly important memoir." -- The Times
** As featured in The Wall Street Journal, People, and on The TODAY Show ** A New York Times "New & Noteworthy" Pick ** An O Magazine "Book of the Month" Pick ** A Publishers Weekly Bestseller **
The incredible life story of Haben Girma, the first Deafblind graduate of Harvard Law School, and her amazing journey from isolation to the world stage.
Haben grew up spending summers with her family in the enchanting Eritrean city of Asmara. There, she discovered courage as she faced off against a bull she couldn't see, and found in herself an abiding strength as she absorbed her parents' harrowing experiences during Eritrea's thirty-year war with Ethiopia. Their refugee story inspired her to embark on a quest for knowledge, traveling the world in search of the secret to belonging. She explored numerous fascinating places, including Mali, where she helped build a school under the scorching Saharan sun. Her many adventures over the years range from the hair-raising to the hilarious.

Haben defines disability as an opportunity for innovation. She learned non-visual techniques for everything from dancing salsa to handling an electric saw. She developed a text-to-braille communication system that created an exciting new way to connect with people. Haben pioneered her way through obstacles, graduated from Harvard Law, and now uses her talents to advocate for people with disabilities.

HABEN takes readers through a thrilling game of blind hide-and-seek in Louisiana, a treacherous climb up an iceberg in Alaska, and a magical moment with President Obama at The White House. Warm, funny, thoughtful, and uplifting, this captivating memoir is a testament to one woman's determination to find the keys to connection.

Lainey Feingold is a disability rights lawyer focusing on digital access, an international speaker, and the author of Structured Negotiation, A Winning Alternative to Lawsuits. Lainey has worked with blind people and their organizations across the United States for close to twenty-five years to make the digital and tech environment available to everyone. Her book is packed with win-win stories of accessibility advocacy with some of the largest organizations in the U.S. Lainey and Haben were two of 13 lawyers honored as "Legal Rebels” in the United States by the American Bar Association in 2017.  More info at LFLegal.com <http://lflegal.com/> or on Twitter @LFLegal