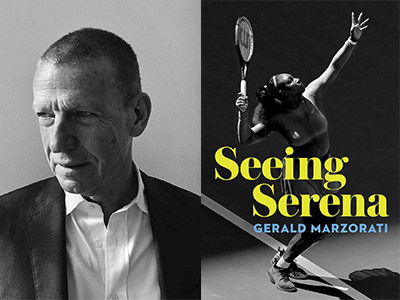 Award-winning nonfiction writer Gerald Marzorati discusses his riveting new work, Seeing Serena. Gerald will be in conversation with Louisa Thomas, a staff writer at The New Yorker and a former writer and editor for Grantland, her writing has appeared in The New Yorker, The Atlantic, The New York Times, Vogue, and other places.

Serena Williams is an undisputed global sports celebrity. Ranked #12 on ESPN's 2018 World Fame 100 list of popular athletes, thirty-seven-year-old Serena Williams is the only female in the top 20, and she's one of the highest paid athletes in the world. The face of women's tennis for the past two decades, Serena is now waging battles on multiple fronts--against age, injuries, and opponents almost twenty years her junior, all while juggling her responsibilities as a new mom.

Seeing Serena is an in-depth chronicle of Serena Williams' return to tennis after giving birth to her daughter, and an insightful cultural analysis of the most consequential female athlete of her time. Author Gerald Marzorati shadows her through her 2019 season, from Melbourne and the Australian Open, to Roland-Garros and Wimbledon, and on to the US Open as she seeks her 24th Grand Slam singles title. He writers about her tennis and her forays into fashion, investing, and developing her personal brand on social media.

Seeing Serena illuminates Williams's singular status as the greatest women's tennis player of all time and--in a moment when race and gender are the most talked-about topics in America and beyond--a pop icon like no other. Marzorati is on the scene, observing her matches, and talking to her, her coach, her competitors, and former greats who have witnessed her for years.

He observes her, listens to her, studies her, explores her roles in society and history--sees Serena fully, in all the ways she has come to matter.

Gerald Marzorati was the editor of The New York Times Magazine from 2003 until 2010. He previously worked as an editor at Harper’s magazine and The New Yorker. He is the author of Seeing Serena, Late to the Ball, and A Painter of Darkness, which won the PEN/Martha Albrand Award for a first book of nonfiction. His writing about tennis has appeared in The New York Times and on NewYorker.com.