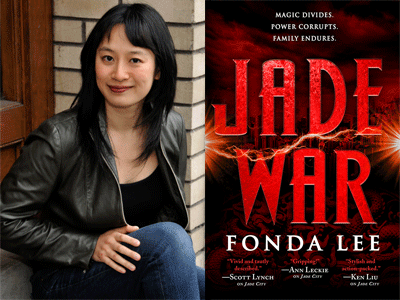 World Fantasy Award-winning author Fonda Lee discusses the sweeping second installment of her epic Green Bone Saga trilogy, Jade War. Fonda will be in conversation with Mike Chen, debut author of the twisty the time-travel adventure, Here and Now and Then.

About Jade War: On the island of Kekon, the Kaul family is locked in a violent feud for control of the capital city and the supply of magical jade that endows trained Green Bone warriors with supernatural powers they alone have possessed for hundreds of years.
Beyond Kekon's borders, war is brewing. Powerful foreign governments and mercenary criminal kingpins alike turn their eyes on the island nation. Jade, Kekon's most prized resource, could make them rich - or give them the edge they'd need to topple their rivals.
Faced with threats on all sides, the Kaul family is forced to form new and dangerous alliances, confront enemies in the darkest streets and the tallest office towers, and put honor aside in order to do whatever it takes to ensure their own survival - and that of all the Green Bones of Kekon.
Jade War is the second book of the Green Bone Saga, an epic trilogy about family, honor, and those who live and die by the ancient laws of blood and jade.
About Here and Now and Then: Kin Stewart is an everyday family man: working in IT, trying to keep the spark in his marriage, struggling to connect with his teenage daughter, Miranda. But his current life is a far cry from his previous career...as a time-traveling secret agent from 2142.
Stranded in suburban San Francisco since the 1990s after a botched mission, Kin has kept his past hidden from everyone around him, despite the increasing blackouts and memory loss affecting his time-traveler's brain. Until one afternoon, his "rescue" team arrives--eighteen years too late.
Their mission: return Kin to 2142, where he's been gone only weeks, not years, and where another family is waiting for him. A family he can't remember.
Torn between two lives, Kin is desperate for a way to stay connected to both. But when his best efforts threaten to destroy the agency and even history itself, his daughter's very existence is at risk. It'll take one final trip across time to save Miranda--even if it means breaking all the rules of time travel in the process.
Event date:
Friday, September 13, 2019 - 7:00pm
Event address:
Books Inc.
317 Castro Street
Mountain View, CA
Peninsula Events
South Bay
Books:

Here and Now and Then (Paperback)