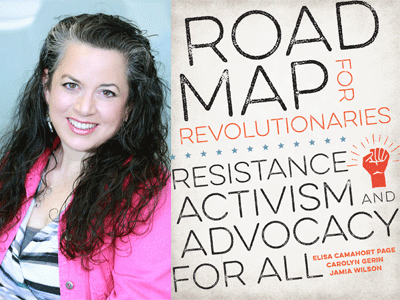 Elisa Camahort Page, activist and co-founder of the pioneering women's media company BlogHer, discusses her essential and engaging guide, Road Map for Revolutionaries: Resistance, Activism, and Advocacy for All. Elisa will be in conversation with Courtney Macavinta, CEO/Founder of The Respect Institute--whose mission is to give youth and their influencers tools to build self-respect so they can end cycles of disrespect and thrive. Receive a free social change kit from The Respect Institute at the event!

About Road Map for Revolutionaries: A direct, snappy guidebook on engaging in effective day-to-day activism and advocacy at all levels that uses checklists, interviews, and case studies to showcase the tools for making the changes you want to see in society and government.

As marches, protests, and boycotts return to the cultural conversation in the United States and everyday people look to take action and make their voices heard, this hands-on, hit-the-ground-running guide delivers lessons on practical tactics for navigating and protecting one's personal democracy in a gridlocked, heavily surveilled, and politically volatile country. Aimed at people who want to act but don't know what to do next, Road Map for Revolutionaries provides the resources needed to help you feel more safe, empowered, invested in, and intrinsic to the American experiment. Authors Elisa Camahort Page, Carolyn Gerin, and Jamia Wilson pull from a shared interest in positive change and diverse cultural, generational, and occupational backgrounds to break down key issues and outline action steps for local, state, and federal levels. The book addresses timely topics such as staying safe at protests, supporting marginalized communities, online privacy, and keeping up the fight for the long term. Along with breaking down topics into bullet point-style takeaways, the team also supplements the information with chapter opener illustrations from designer, artist, and archivist Josh MacPhee and infographics created by designer Lilli Keinaenen.

"Road Map for Revolutionaries answers all the questions you were afraid to ask, plus some you never thought of. It's portable, requires no batteries or electricity, and was created by three smart women. I recommend it!"
--Gloria Steinem, activist and writer

"As we look around and see this troubling rise of violence, intolerance, and injustice, in our world, many people want to play a more active role in solving these problems. The biggest issue is most of us do not know how. Thankfully, these three brilliant and bad-ass women wrote the book we have been waiting for. Road Map for Revolutionaries is a powerful step by step guide that shows us how to move from outrage to action in ways that lead to sustainable impact and change. If you are ready to change the world right now, read this book and go get to work."
--Bobby Jones, CMO of PeaceFirst and author of Good is the New Cool

"What a necessary and timely project. I want to buy two more copies immediately to share with my two sons. It is awesome."
--Ricki Lake, talk show host, actor, and activist

Courtney Macavinta is Co-Founder of The Respect Institute (Ri) whose mission is to give youth and their influencers tools to build self-respect so they can end cycles of disrespect and thrive. Courtney also is a former Juvenile Justice Commissioner, for Santa Clara County, and co-author of the best-selling book for teens, RESPECT (Free Spirit Publishing, 2005). Ri has reached more than 80,000 youth and their influencers in schools, jails, and community based programs around the globe for the past decade. She’s been featured by CNN, ABC, National Public Radio, USA Today, Teen Vogue and tapped as a resource by the Obama Administration and the Clinton Global Initiative.

Road Map for Revolutionaries: Resistance, Activism, and Advocacy for All (Paperback)