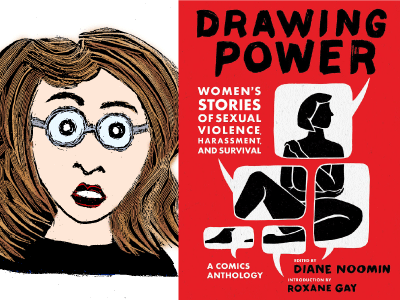 Diane Noomin is the creator of the comics character DiDi Glitz, editor of both Twisted Sisters anthologies, and was one of the early contributors to Wimmen’s Comix. She has been nominated for Harvey and Eisner Awards and received an Inkpot Award. Glitz-2-Go, a collection of Noomin’s art throughout her career, was published in 2013. Her work is included in the Library of Congress Prints and Photographs collection. Her most recent work is Drawing Power, which she both edited and contributed to.

Liz Mayorga is a cartoonist from California. Her work combines folklore and popular culture with feminist theory. When she’s not teaching or creating something new, she enjoys playing with animals and riding her bike. Liz is a DIY artist who is also proud of being a working-class Xicana.

Lee Marrs is the first woman to work for DC Comics and Marvel simultaneously. She was also one of the founders of Wimmen’s Comix. An Emmy and Inkpot Award winner and 2016 Eisner Award nominee, Lee is best known for her Pudge, Girl Blimp series, now a book. Her other work includes Batman, Wonder Woman, Indiana Jones, and Gay Comics. Lee is the retired multimedia arts chair of Berkeley City College.

M. Louise Stanley  makes paintings that juxtapose myth and allegory in order to poke fun at contemporary politics and mores with a deadly serious brush. Stanley teaches painting and drawing at Berkeley City College and resides in Emeryville, California. She is a recent recipient of both the Pollock- Krasner Foundation and John Simon Guggenheim Fellowships.

Ajuan Mance  is a professor of African American literature at Mills College and a lifelong artist and writer. Ajuan’s work has appeared in a number of online and print publications. Her art and comics use humor and color to explore the complexities of race and gender in the United States.

Minnie Phan is an illustrator and cartoonist living in Oakland, California. She focuses on themes of cultural heritage, diversity, personal stories, and the invisible things that shape who we are. Clients include NPR, Live Nation, Starbucks, and Colorlines. See more of her work at minniephan.com.

Tyler Cohen is a cartoonist who uses autobiography and surrealism to explore gender, parenthood, race, and female experience. Her book Primahood: Magenta won the 2017 Bisexual Book Award for Graphic Memoir. Her work has appeared online in Illustrated PEN and Mutha Magazine and in print in numerous anthologies. See primazonia.com for more.

Trinidad Escobar is an alumnus of the Jack Kerouac School of Disembodied Poetics as well as the MFA in Comics program at California College of the Arts. Her graphic novel Of Sea and Venom will be published by Farrar, Straus and Giroux in 2021. She lives in Oakland, California, with her son, Kalayo.

Avy Jetter writes, draws, and self-publishes the comic book Nuthin’ Good Ever Happens at 4 a.m. and is an avid horror and gore movie fan. She currently lives and works in Oakland, California, and spends her time organizing community events and zine fests. You may also nd her in a local café debating the merits of the latest B horror ick or sci- action thriller with friends.

Tanna Tucker is an illustrator and cartoonist living in Oakland CA. She uses comics and drawing as a way to map her relationship to the Black Diaspora, and to interrogate the utility of Black presence (or absence) in historical and mythical spaces. Her work has been featured in LAAB Magazine, The Nib and in various anthologies including Black Comix Returns and Cosmic Underground: A Grimoire of Black Speculative Content. She is currently a Political Power Fellow at theYerba Buena Center for the Arts.