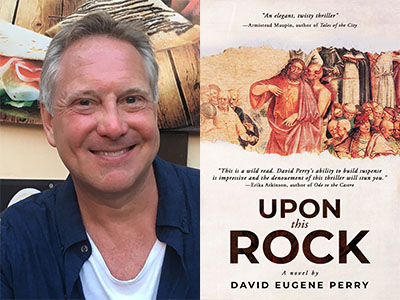 *This event has been rescheduled from the original date of Saturday, January 22 and will now be taking place on Sunday, February 20 at 3:00 PM. All other details remain the same.*

Join local writer David Eugene Perry for a special event in celebration of his intriguing & elegant work of fiction, Upon This Rock.

Intrigue, terrorism, history, art, and the secrets of the Church collide in a relentless page-turning thriller

"An elegant, twisty thriller in which a gay couple investigates a mysterious suicide in a scenic Italian hill town. It's not hard to imagine that this book could do for Orvieto what Midnight in the Garden of Good and Evil did for Savannah." (Armistead Maupin, author of the internationally acclaimed Tales of the City)

An American couple in Italy investigate the suicide of a cleric in the picturesque Italian city of Orvieto--and find themselves plunged into a conspiracy that may destroy the Catholic Church. In the stunning thriller Upon This Rock, San Francisco business executive Lee Maury and his husband Adriano come to Orvieto to soak in the city's beauty and rich history, but Lee becomes fascinated with a local tragedy, the suicide one year earlier of Deacon Andrea, a much-loved candidate for the priesthood.

Growing obsessed with learning the truth behind Andrea's death, Lee and Adriano stumble upon a conspiracy of terrorism, human trafficking, and a plot to destroy one of the Church's most sacred shrines--all somehow linked across 500 years to Renaissance Pope Clement VII, who escaped to Orvieto after the sack of Rome in 1527. Before they know it, Lee and Adriano's dream vacation becomes a race to save innocent lives--and not get killed in the process.

Upon This Rock (Paperback)