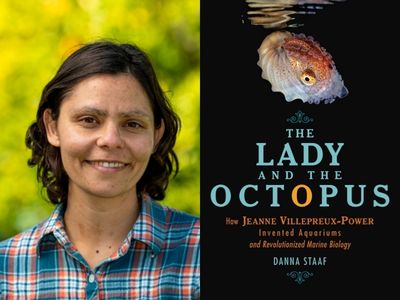 Celebrate World Octopus Day with our favorite cephalopod science writer, Danna Staaf, author of The Lady and the Octopus at Books Inc. Campbell!

The Lady and the Octopus: How Jeanne Villepreux-Power Invented Aquariums and Revolutionized Marine Biology is a biography of an amazing woman you’ve probably never heard about…until now!

Danna will be appearing in costume, reading from her book. She’ll be signing her books as well, personalizing with a drawing of your favorite cephalopod!

An immensely engaging look at at the life of an unconventional woman who made major discoveries.

Jeanne Villepreux-Power was never expected to be a scientist. Born in 1794 in a French village more than 100 miles from the ocean, she pursued an improbable path that brought her to the island of Sicily. There, she took up natural history and solved the two-thousand-year-old mystery of how of the argonaut octopus gets its shell.

In an era when most research focused on dead specimens, Jeanne was determined to experiment on living animals. And to keep sea creatures alive for her studies, she had to invent a contraption to hold them—the aquarium. Her remarkable life story is told by author, marine biologist, and octopus enthusiast Danna Staaf.

"From its very first scene on a sun-drenched beach in Sicily, this book bursts with the passion and enthusiasm of its subject, nineteenth-century naturalist Jeanne Villepreux-Power, who was bent on studying live sea creatures rather than the dead specimens of her contemporaries. With lively, engaging, and at times humorous text, Staaf deftly turns issues like the fallibility of biographies or the ethics of animal experimentation into thoughtful discussion points for young readers to explore. Fascinating from beginning to end!"—Joyce Sidman, author of The Girl Who Drew Butterflies, winner of the Robert F. Sibert Informational Book Medal

"This story of one woman's pluck, determination, and scientific insight is a riveting read for anyone of any age!"—Sy Montgomery, author of The Soul of an Octopus, a National Book Award finalist

Danna Staaf is a freelance science communicator with a PhD in marine biology. Her writing has appeared in Science, KQED, Earther, and io9, and her first book, Squid Empire: The Rise and Fall of the Cephalopods (now reprinted as Monarchs of the Sea: The Extraordinary 500-Million-Year History of Cephalopods), was named one of the best science books of 2017 by NPR. She created the science outreach program Squids4Kids and visits schools at every grade level, as well as venues from museums to libraries to tech companies. She lives in San Jose with her spouse, children, and innumerable plush octopuses.

The Lady and the Octopus: How Jeanne Villepreux-Power Invented Aquariums and Revolutionized Marine Biology (Hardcover)