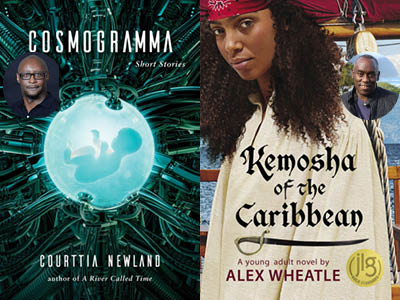 Join Books Inc. for a fantastic panel with two award-winning writers! Courttia Newland joins us in celebration of his new story collection, Cosmogramma; and Alex Wheatle will joins us for a discussion of his powerful forthcoming YA novel, Kemosha of the Caribbean. This special event will be moderated by local bookseller and book editor, Jerry Thompson.

About Cosmogramma: A dark and incisive collection of speculative short stories set in an alternate future of interstellar space travel, robots, mythical creatures, and the uncanny.
"Newland easily engages readers with complex world-building, well-shaded characters, and stories as entertaining as they are meaningful. It's no small feat to so immediately and repeatedly appeal to readers' hearts and minds, and Newland's mastery of short-format storytelling is sure to impress. Speculative fiction fans won't be able to put this down."
--Publishers Weekly, starred review
"Newland's writing is in league with a host of SF subgenres, from pulpy space opera to N.K. Jemisin-style Afrofuturism to Jeff VanderMeer-esque eco-fiction. But his chief skill is weaving those tropes into stories that are both wildly speculative and on the news . . . Wide-ranging and deeply imaginative; Newland is equally at home in council flats and deep space."
--Kirkus Reviews
In his exquisite first collection of speculative fiction, Courttia Newland envisages an alternate future as lived by the African diaspora.
Kill parties roam the streets of a post-apocalyptic world; a matriarchal race of mer creatures depends on interbreeding with mortals to survive; mysterious seeds appear in cities across the world, growing into the likeness of people in their vicinity.
Through transfigured bodies and impossible encounters, Newland brings a sharp, fresh eye to age-old themes of the human capacity for greed, ambition, and self-destruction, but ultimately of our strength and resilience.
About Kemosha of the Caribbean: In 1668, a young Jamaican girl, Kemosha, secures her freedom from enslavement and finds her true self while sailing to Panama with the legendary Captain Morgan.
A Junior Library Guild Gold Standard Selection
In 1668, fifteen-year-old Kemosha is sold by a slave owner to a tavern keeper in Port Royal, Jamaica--the "wickedest city on earth." She soon flees from a brutal assault and finds herself in the company of a mysterious free Black man, Ravenhide, who teaches her the fine art of swordplay, introduces her to her soul mate, Isabella, and helps her win her freedom.
Ravenhide is a privateer for the notorious Captain Morgan aboard his infamous ship, the Satisfaction. At Ravenhide's encouragement, Morgan invites Kemosha to join them on a pillaging voyage to Panama. As her swashbuckling legend grows, she realizes she has the chance to earn enough to buy the freedom of her loved ones--if she can escape with her life . . .
About the Authors:
Courttia Newland is the author of seven books including A River Called Time, The Gospel According to Cane, and his much-lauded debut, The Scholar. In 2016 he was awarded the Roland Rees Bursary for playwriting. As a screenwriter, he has written two episodes of the Steve McQueen BBC series Small Axe.
Alex Wheatle is the author of several best-selling books including the young adult novels Cane Warriors and Home Girl, the modern classic Brixton Rock, and the multiaward-winning Crongton series. He is the subject of the historical drama film Alex Wheatle, which is part of filmmaker Steve McQueen's lauded anthology series Small Axe. His body of work is a finalist for the 2021 NSK Neustadt Prize for Children's Literature and has won numerous awards, including the Guardian Children's Fiction Prize. Wheatle lives in South London.
About the Moderator:
Jerry Thompson is a bookseller, poet, playwright, and musician. His work has appeared in ZYZZYVA and the James White Review. He is the coauthor of Images of America: Black Artists in Oakland. His fiction and prose have appeared in various anthologies including Voices Rising, edited by G. Winston James, and Freedom in this Village: Twenty-Five Years of Black Gay Men’s Writing, edited by E. Lynn Harris. He is the coeditor of both Oakland Noir and Berkeley Noir.
Event date:
Saturday, January 29, 2022 - 12:00pm
Event address:
Virtual Event-Via Zoom Webinar
Pacific Standard Time
San Francisco, CA
Virtual Events
San Francisco Events
East Bay Events
Peninsula Events
South Bay
............