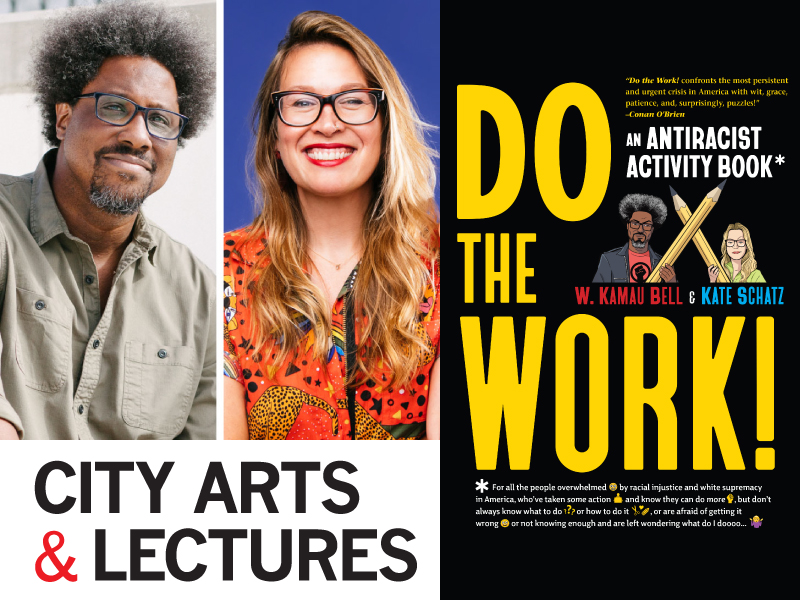 in conversation with Anna Sale

For the millions of Americans asking “What can I do?” to dismantle white supremacy comes an answer: Do the Work! An Antiracist Activity Book. The revolutionary antiracism workbook by W. Kamau Bell and Kate Schatz addresses institutional racism in the United States, giving readers a hands-on understanding of systemic racism, white privilege, and Black disenfranchisement–and what to do about it all.

Kamau Bell is a dad, a husband, and a comedian. He directed and executive produced the 2022 Showtime documentary We Need To Talk About Cosby, and he is the host of the Emmy-Award-winning CNN docu-series United Shades of America with W. Kamau Bell. Bell has appeared on just about every late night comedy show, daytime news program, and broadcast media outlet you can think of, and his writing has been featured widely, including in his memoir and manifesto The Awkward Thoughts of W. Kamau Bell: Tales of a 6′ 4″, African American, Heterosexual, Cisgender, Left-Leaning, Asthmatic, Black and Proud Blerd, Mama’s Boy, Dad, and Stand-Up Comedian. He has two stand-up comedy specials, Private School Negro and Semi-Prominent Negro.

Kate Schatz is the New York Times bestselling author of the “Rad Women” book series. She is the co-founder of Solidarity Sundays, a political action network that hosts monthly “activist house parties” in dozens of cities nationwide aimed at showing women how to take meaningful, coordinated political action. After the 2016 election, the group grew from one chapter with fifty members to over 200 chapters with more than 20,000 members. An educator for more than fifteen years, Schatz has worked with a wide range of age groups teaching Women’s Studies, creative writing, and journalism.

Photo by Aundre Larrow for The New York Times/Karen Santos

Masks are required inside the venue. Policy subject to change based on San Francisco Department of Public Health guidelines and/or requirements of the featured guests.

Do the Work!: An Antiracist Activity Book (Paperback)