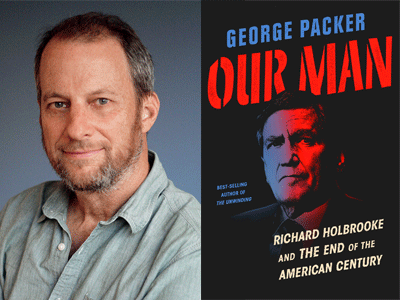 In Conversation with Clara Jeffery

Longtime staff writer for The New Yorker, George Packer has written on the Iraq war, the civil war in Sierra Leone, and a number of other foci of global unrest. He has written multiple books of nonfiction–including The Unwinding and The Assassin’s Gate–two novels, and a play, as well as essays, articles, and reviews for The New York Times Magazine, Dissent, Mother Jones, and Harper’s, among others. His new book, Our Man: Richard Holbrooke and the End of the American Century, tells the story of the life of the polarizing American diplomat through the lens of a fictional narrator with knowledge of the very real intimate details of Holbrooke’s life, which Packer was able to garner from his exclusive access to diaries and personal papers. The jury of the Whiting Grant, from whom Packer received a 2017 grant for creative nonfiction, writes, “Irreverent, fast-paced, and unfailingly rigorous, this is nonfiction writing that breaks new ground…This masterly account reads like a literary novel of the highest order while providing an insightful look into the deeper nature of power and the lives of those who hold it.”

Clara Jeffery is Editor-in-Chief of Mother Jones, a position she has held for over 10 years, and a recipient of a PEN America award for editing. Before joining Mother Jones, Jeffery was a senior editor for Harper’s Magazine. Jeffery began her journalistic career at Washington City Paper.

Our Man: Richard Holbrooke and the End of the American Century (Hardcover)