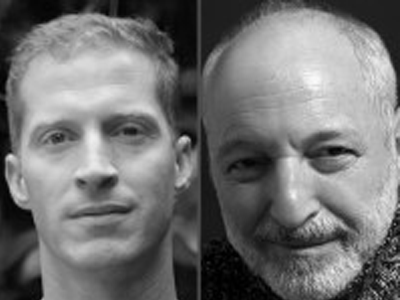 In Conversation with Steven Winn

On Sale to Members Wednesday, June 12 at 10am

Tickets available to members only at this time. If you’d like to become a member click HERE or give us a call at 415-563-2463 for more information.

Andre Aciman is a memoirist, essayist, novelist, and scholar of seventeenth-century literature. Call Me By Your Name, Aciman’s best-known novel, was adapted into an Academy Award-winning film. The sequel, Find Me, catches up with beloved characters Elio and Oliver in adulthood. Aciman is the editor of The Proust Project and teaches comparative literature at the Graduate Center of the City University of New York.

Novelist Andrew Sean Greer is the author of six books including The Confessions of Max Tivoli (“enchanting, in the perfumed, dandified style of disenchantment brought to grandeur by Proust and Nabokov”  – John Updike) and the Pulitzer Prize winning Less, a comedy about a man fleeing the humiliations of love, middle-age, and failure by accepting invitations that lead to a trip around the world and back.

Steven Winn is a fiction writer and award-winning arts journalist whose writing has appeared in The New York Times, Southern Poetry Review, and Sports Illustrated. Winn spent 28 years at the San Francisco Chronicle, and the last six as the Arts and Culture Critic. His past City Arts & Lectures interviews include Sally Mann, Zadie Smith, Michael Chabon, and Edward St. Aubyn.

Find Me: A Novel (Hardcover)

Less (Winner of the Pulitzer Prize): A Novel (Paperback)