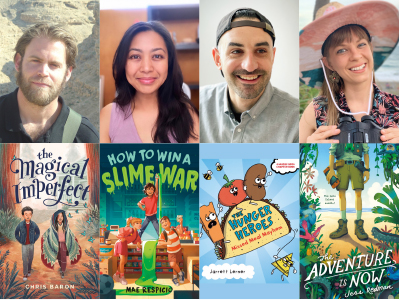 About The Magical Imperfect: Highly recommended... Perfect for readers of Wonder and Erin Entrada Kelly's Hello, Universe.-- Booklist magazine, starred review
Etan has stopped speaking since his mother left. His father and grandfather don't know how to help him. His friends have given up on him.
When Etan is asked to deliver a grocery order to the outskirts of town, he realizes he's at the home of Malia Agbayani, also known as the Creature. Malia stopped going to school when her acute eczema spread to her face, and the bullying became too much.
As the two become friends, other kids tease Etan for knowing the Creature. But he believes he might have a cure for Malia's condition, if only he can convince his family and hers to believe it too. Even if it works, will these two outcasts find where they fit in?
About How to Win a Slime War: Two kids face off in an epic battle to see who can sell the most slime, while navigating sticky situations with friends and family.
Alex Manalo and his dad have just moved back to Sacramento to help out with their extended family's struggling Filipino market. While Alex likes helping in the store, his true passion is making slime! He comes up with his own recipes and plays with ingredients, colors, and different bumpy or sparkly bits, which make his slime truly special. A new friend encourages Alex to sell his creations at school, which leads to a sell-off battle with a girl who previously had a slime-opoly. Winner gets bragging rights and the right to be the only slime game in town.
But Alex's dad thinks Alex should be focused more on traditional boy pastimes and less on slime. As the new soccer coach, Dad gets Alex to join the team. Even though he hates sports, Alex gives in.
Alex is battling on multiple fronts--with his new friends at school, and with his dad at home. It will be a sticky race to the finish to see who oozes out on top.
(Available September 14, 2021. Pre-Order today!)
About The Hunger Heroes: A group of silly superheroes--a bean, a chip, a tomato, and a wedge of cheddar cheese--come to the rescue of a hungry kid stuck at school in this first book in the silly and adventurous graphic novel chapter book series The Hunger Heroes!Meet the Hunger Heroes: Toots the Bean, Chip Ninja, Tammy the Tomato, and Leonard, a wedge of cheddar cheese, ready to save kids--even cranky, annoying ones--all over the world while flying around in their taco hovercraft!
It's a typical Monday when the Hunger Heroes get the call: a kid in Ms. Sternbladder's class missed breakfast and isn't allowed to have snacks! How will he pass his math test, study for spelling, or play soccer at recess if his stomach is growling out of control? Hunger Heroes to the rescue!
(Available October 26, 2021. Pre-Order today!)
About The Adventure is Now: A fun-filled, action-packed middle grade novel about a boy who learns about protecting the environment, finding real friends, and living in the now while spending the summer on a remote island.
Sometimes it's hard to be Milton P. Greene. He says all the wrong things, his family is falling apart, and everyone at school avoids him because of the very embarrassing Bird Brain Incident. But when Milton plays his video game Isle of Wild, he becomes someone else--Sea Hawk, the brave and brilliant naturalist explorer who conquers danger at every turn.
Then Milton's parents ship him off to the remote Lone Island for the summer, where his uncle Evan is an environmentalist researcher. The island is chock-full of spectaculous species, and Milton realizes this is his chance to become the brave and brilliant naturalist he's always wanted to be--and even meet some fellow explorers!
But as it turns out, the future of the Lone Island is in some pretty serious peril, and the only thing that can save it is a field guide full of cryptic clues. If Milton and his unexpected new friends are going to protect the island, they'll have to trust each other, discover new truths, and embark on a wild and wondrous adventure all their own. 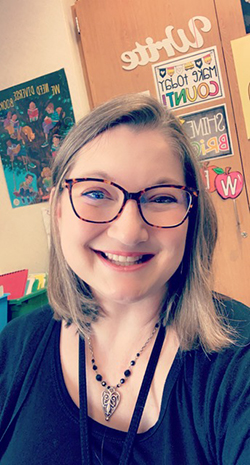 Shari Sawyers has taught public school, private, and preschool for over 20 years, and is currently the librarian at McCoy Elementary in Carrollton, Texas