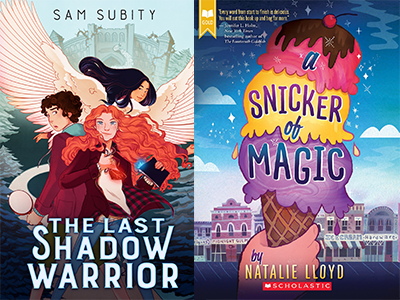 Celebrate Children's Book Week with Sam Subity and his newest middle grade novel, The Last Shadow Warrior. Sam will be in conversation with Natalie Lloyd, author of the delightful debut novel A Snicker of Magic. (Ages 8+)

About The Last Shadow Warrior: Percy Jackson meets Thor in a laugh-out-loud, action-packed adventure inspired by Norse mythology.
Twelve-year-old Abby Beckett is proud to come from a long line of elite Viking warriors known as the Aesir. She's spent her entire life training to hunt the horrific creatures known as Grendels-the ancient foe of the Aesir-just like her mother did before she died. But there's just one, small problem: No one has seen a Grendel in centuries, and the Viking Council wants to disband the Aesir . . . forever.
When her father is injured in an attack that leaves him in a coma, Abby is forced to take refuge at Vale Hall, a mysterious school in Minnesota where nothing is quite as it seems. She soon discovers the tables have turned and a Grendel is hunting her, but when she tries to alert the Viking Council, they accuse her of making up stories for attention . . . just like her mother did.
Desperate to protect her father and clear her mother's name, Abby goes on a dangerous quest to discover the truth--a journey that brings her face-to-face with some unlikely foes, including a Ping-Pong-playing sea monster with a wicked backhand, and a dark Valkyrie with a fondness for bingo. Abby quickly realizes that someone at the school is trying to stop her progress and destroy the Aesir for good. And only she can unravel the sinister plot before it's too late.
About A Snicker of Magic: Natalie Lloyd's SPINDIDDLY debut novel, now in paperback!
A Snicker of Magic joins the Scholastic Gold line, which features award-winning and beloved novels. Includes exclusive bonus content!Midnight Gulch used to be a magical place, a town where people could sing up thunderstorms and dance up sunflowers. But that was long ago, before a curse drove the magic away. Twelve-year-old Felicity knows all about things like that; her nomadic mother is cursed with a wandering heart.But when she arrives in Midnight Gulch, Felicity thinks her luck's about to change. A word collector, Felicity sees words everywhere---shining above strangers, tucked into church eves, and tangled up her dog's floppy ears---but Midnight Gulch is the first place she's ever seen the word home. And then there's Jonah, a mysterious, spiky-haired do-gooder who shimmers with words Felicity's never seen before, words that make Felicity's heart beat a little faster. Felicity wants to stay in Midnight Gulch more than anything, but first, she'll need to figure out how to bring back the magic, breaking the spell that's been cast over the town . . . and her mother's broken heart.
Event date:
Tuesday, May 4, 2021 - 5:00pm
Event address:
Virtual Event - Via Zoom
Pacific Standard Time
San Francisco, CA
Just for Kids
San Francisco Events
East Bay Events
Peninsula Events
South Bay
............