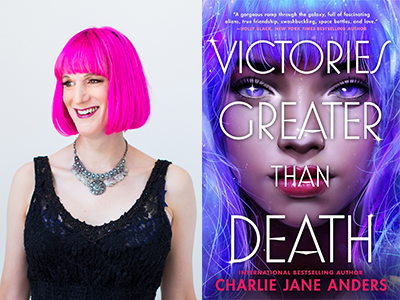 *Please Note: Pre-registration via Eventbrite is required. Crowdcast information will be sent leading up to the event date.*
All copies of Victories Greater Than Death sold for this event / pre-order will be autographed by Charlie Jane Anders and will include special swag! To order yours, RSVP below.

About Victories Greater Than Death: Outsmart Your Enemies. Outrun the Galaxy. "Just please, remember what I told you. Run. Don't stop running for anything."
Tina never worries about being 'ordinary'--she doesn't have to, since she's known practically forever that she's not just Tina Mains, average teenager and beloved daughter. She's also the keeper of an interplanetary rescue beacon, and one day soon, it's going to activate, and then her dreams of saving all the worlds and adventuring among the stars will finally be possible. Tina's legacy, after all, is intergalactic--she is the hidden clone of a famed alien hero, left on Earth disguised as a human to give the universe another chance to defeat a terrible evil.
But when the beacon activates, it turns out that Tina's destiny isn't quite what she expected. Things are far more dangerous than she ever assumed--and everyone in the galaxy is expecting her to actually be the brilliant tactician and legendary savior Captain Thaoh Argentian, but Tina....is just Tina. And the Royal Fleet is losing the war, badly--the starship that found her is on the run and they barely manage to escape Earth with the planet still intact.
Luckily, Tina is surrounded by a crew she can trust, and her best friend Rachel, and she is still determined to save all the worlds. But first she'll have to save herself.
Buckle up your seatbelt for this thrilling YA sci-fi adventure set against an intergalactic war from internationally bestselling author Charlie Jane Anders.
About How the King of Elfhame Learned to Hate Stories: Return to the captivating world of Elfhame with this illustrated addition to the New York Times bestselling Folk of Air trilogy that began with The Cruel Prince, from award-winning author Holly Black.
Once upon a time, there was a boy with a wicked tongue.
Before he was a cruel prince or a wicked king, he was a faerie child with a heart of stone. #1 New York Times bestselling author, Holly Black reveals a deeper look into the dramatic life of Elfhame's enigmatic high king, Cardan. This tale includes delicious details of life before The Cruel Prince, an adventure beyond The Queen of Nothing, and familiar moments from The Folk of the Air trilogy, told wholly from Cardan's perspective.
This new installment in the Folk of the Air series is a return to the heart-racing romance, danger, humor, and drama that enchanted readers everywhere. Each chapter is paired with lavish and luminous full-color art, making this the perfect collector's item to be enjoyed by both new audiences and old.
Event date:
Tuesday, April 13, 2021 - 5:00pm
Event address:
Via Crowdcast - RSVP Required
Pacific Standard Time
San Francisco, CA
San Francisco Events
East Bay Events
Peninsula Events
South Bay
............