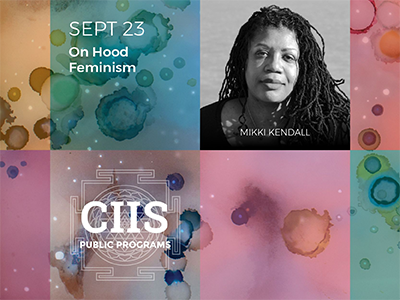 A LIVE ONLINE CONVERSATION WITH MIKKI KENDALL AND DANIELLE DRAKE: On Hood Feminism

Author and public speaker Mikki Kendall believes that today’s feminist movement has a glaring blind spot, and paradoxically, it is women. Mainstream feminists rarely talk about meeting basic needs as a feminist issue, but food insecurity, access to quality education, safe neighborhoods, a living wage, and medical care are all feminist issues. All too often, however, the focus is not on basic survival for the many, but on increasing privilege for the few.

When feminists fail to prioritize these issues, it exacerbates the age-old problem of both internal discord within the movement, and women who balk at carrying the title of “feminist.” Moreover, prominent white feminists broadly suffer from their own myopia about issues like race, class, sexual orientation, and their ability to intersect with gender. How can we stand in solidarity as a movement, Mikki asks, when there is the distinct likelihood that some women are oppressing others?

In Mikki’s latest book, Hood Feminism, she takes aim at the legitimacy of the modern feminist movement, arguing that it has chronically failed to address the needs of all but a few women. Drawing on Mikki’s own experiences with hunger, violence, and hypersexualization, she delivers an irrefutable indictment of a movement in flux and issues a ferocious clarion call to all would-be feminists.

Join CIIS Expressive Arts Therapy Professor and Program Chair Danielle Drake for a conversation with Mikki about feminism and learn to live out the true mandate of the movement in thought and in deed.

Please note that this talk/conversation will be hosted live online and includes an audience Q&A. Instructions on how to join the conversation will be included in your event confirmation email. If you need additional assistance finding or joining the event, please email publicprograms@ciis.edu. Mikki Kendall is a writer, speaker, and blogger whose work has appeared in The Washington Post, The Boston Globe, The Guardian, TIME, Salon, Ebony, Essence, and elsewhere. An accomplished public speaker, she has discussed race, feminism, violence in Chicago, tech, pop culture, and social media on NPR's Tell Me More, Al Jazeera's The Listening Post, BBC Women's Hour, Huffington Post Live, as well as at universities across the country. In 2017, she was awarded Best Food Essay from the Association of Food Journalists for her essay on hot sauce, Jim Crow, and Beyoncé. She co-edited the Locus nominated anthology Hidden Youth and is part of the Hugo-nominated team of editors at Fireside Magazine. A veteran, she lives in Chicago with her family. Danielle Drake, PhD is Associate Professor, Program Co-Chair, and a graduate of the Counseling Psychology, Expressive Arts Therapy MA program at California Institute of Integral Studies. She received her PhD in Clinical Psychology from Fielding Graduate University with her dissertation study focused on the use creativity and spirituality among African Americans. As a result of her dissertation research she developed and conducted an initial validation of the Black Spiritual Creativity Scale. Her clinical work as an Expressive Arts Therapist engages clients in creative writing, music, and visual arts processes. She uses a liberatory informed theoretical approach that incorporates Womanist (black feminist), and Black/African-centered psychologies with Narrative Therapy, Emotion Focused Therapy, and contemplative practices. Dr. Drake is co-author of book chapter, “Womanism, Creativity and Resistance,” published in American Psychological Association publication, “Womanist and Mujerista Psychologies: Voice of Fire, Acts of Courage.” In 2018 Dr. Drake hosted a conversation with Angela Davis for CIIS Public Programs on Dr. Davis’ life of activism. As a spoken word artist Dr. Drake is a former Oakland Poetry Slam Champion, and author of Cast Iron Life: A collection of poems and recipes.

Hood Feminism: Notes from the Women That a Movement Forgot (Hardcover)