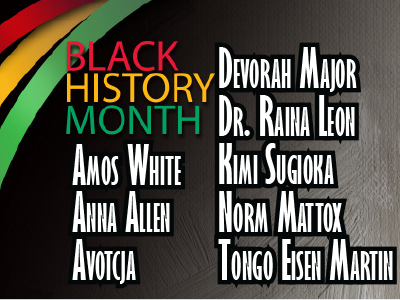 What is the sound of Blackness? When is Blackness a medium? What is the poet's voice in an antiracist society? Our hosts join five Bay Area poets to discuss their works, their reflections on their imagination, and their literary challenges and triumphs as Black poets and writers.

Amos White, Host, is an awarded American haiku poet and author, producer and civil rights activist.  He is published in several national and international anthologies.  A cultural arts impresario, he founded and hosts several salons and shows, which include Heart of the Muse creative’s salon, Beyond Words: Jazz+Poetry show. He is also president of Bay Area Generations literary reading series, a founding member of the Black Speculative Arts Movement (BSAM) California and with the AfroSurreal Writers Workshop - Oakland.

Kimi Sugioka - CoHost, is an educator and poet. She earned an MFA at Naropa University and has published two books of poetry; the newest of which is Wile & Wing on Manic D Press. She is the poet laureate of Alameda, California, and her work appears in various anthologies including: Civil Liberties United, Endangered Species Enduring Values, Colossus:Home, and The City is Already Speaking Vol. 4.

Anna Allen, Poet, is from Stockton, California, and is a performance poet. She’s been published in Sparkle and Blink, little death lit, Chronicling Lit and others. Her poetry reflects the darkness and light that has been part of her life from the beginning.

Monique Jonath is 18 years old and was born and raised in Oakland, California by her Jewish father and Congolese mother. She’s been a dancer her whole life and started writing poetry in her freshman year of high school, first as a joke, then as a very serious passion. She is a 2018 and 2019 Oakland Youth Poet Laureate Finalist and has performed and hosted events in the Oakland area as a result. Since then, her work has been featured in the YouthSpeaks Anthology, "Between My Body and the Air" (2020). She’s a first-year student at Brown University.

Vernon Keeve III (Trey), Poet, is a Virginia born writer, living and teaching in Oakland. He holds an MFA from CCA and a MA in Teaching Literature from Bard College. His full-length collection of poetry, Southern Migrant Mixtape, was published by Nomadic Press and received the PEN Oakland Josephine Miles Award.

Raina J. León, PhD, Author/Poet, is Black, Afro-Boricua, and from Philadelphia.  She is a mother, daughter, sister, madrina, comadre, partner, poet, writer, and teacher educator. She believes in collective action and community work, the profound power of holding space for the telling of our stories, and the liberatory practice of humanizing education. She seeks out communities of care and craft and is a member of the Carolina African American Writers Collective, Cave Canem, CantoMundo, Macondo, and Círculo de Poetas and Writers She is the author of three collections of poetry, Canticle of Idols, Boogeyman Dawn, and sombra: dis(locate) and the chapbooks, profeta without refuge and Areyto to Atabey: Essays on the Mother(ing) Self. Her poetry, nonfiction, fiction, and scholarly work has been published in well over 100 journals and anthologies. She is a member of the SF Writers Grotto and The Ruby in San Francisco. She also is a founding editor of The Acentos Review, an online quarterly, international journal devoted to the promotion and publication of Latinx arts. She educates our present and future agitators/educators as a full professor of education at Saint Mary’s College of California, only the third Black person (all Black women) and the first Afro-Latina to achieve that rank there.  She is an interdisciplinary creative arts practitioner.  She is passionate about Afro-futurism, genealogy and walking in relationship with our ancestors, ecopoetics, writing for change, writing for healing and health, and mothering.

norm mattox, poet - norm is a retired educator living from new york. his poetry tells a story of love and resilience in these times of challenge, struggle and transformation. norm has shared his poetry as a featured reader at open mics around the Bay Area and zoom spaces around the globe. norm has had some poems published in the anthologies, Poetry in Flight/Poesía en Vuelo, The City is Already Speaking and Poetry in The Time of Coronavirus. norm has self-published a chapbook titled, Get Home Safe, Poems for Crossing the Community Grid. Nomadic Press is publishing his second chapbook of poetry titled, Black Calculus, due for release in early 2021.