AVA REID in conversation with ALLISON SAFT at Mountain View 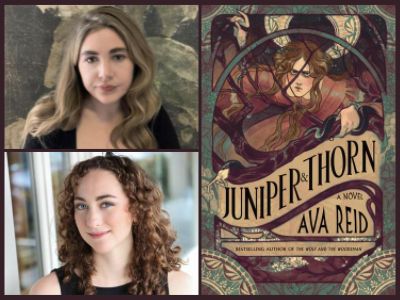 Join Ava Reid for an in storebook launch at Books Inc. Mountain View, for the new book Juniper & Thorn. Ava will be talking about her new book and Allison Saft will be moderating.
ABOUT JUNIPER & THORN
On June 21, Harper Voyager will publish Ava Reid’s JUNIPER & THORN, a gothic horror retelling of the Grimm Brothers fairytale “The Juniper Tree.” Set in the same world as Reid’s acclaimed debut THE WOLF AND THE WOODSMAN, JUNIPER & THORN follows a young witch as she seeks to escape her abusive wizard father in a Ukrainian city inspired by historical Odessa.
Reid expertly weaves themes of femininity, desire, oppression, and progress into the dark fantasy of JUNIPER & THORN. Marlinchen and her sisters are the last true witches in the terrifying city of Oblya, where magic has given way to industry. Though their tyrannical, xenophobic father keeps them sequestered from the outside world, they sneak out at night to explore the city, where Marlinchen meets a dancer who captures her heart. As Marlinchen’s feelings deepen for Sevas, the threat of her father’s rage and magic grows; at the same time, a monster begins leaving dead bodies in its wake. Marlinchen must draw upon her magic to keep her city safe and find her place within it.
It’s a haunting horror fantasy tale with a layered, complex heroine – amid gruesome twists and turns, Reid crafts Marlinchen’s story with compassion, exploring her trauma and building her tender romance with Sevas. And just as she did in her debut, Reid examines nationalism through the lens of magic and fantasy, combining her Ukrainian heritage and academic background to craft the city of Oblya, based on the port city of Odessa in Ukraine, and explore what it means for a city to develop and progress.
PRAISE FOR JUNIPER & THORN
“Darkly enchanting…Reid fully embraces the darkness of the original tale while adding enough twists to make the story her own. Grimms’ fairy tale fans—and those who like their fairy tales grim—will be thrilled.”
– Publishers Weekly, STARRED
“Utterly astonishing. This masterful, complex retelling conjures the pure horror of powerlessness as modernity crashes into tradition, and bodies are transformed and consumed. Juniper & Thorn is the dark fairytale brought to perfection: terrible, and true, and full of teeth.”
– Shelley Parker-Chan, bestselling author of She Who Became the Sun
“In this baroque Grimm retelling, Reid proves again that theirs is a powerful and essential voice. Through Marlinchen – a layered and unforgettable heroine, brought to life with immense compassion – she tells a tale of fear and survival, hope and yearning and defiance, in timelessly elegant prose. It will enchant you, break your heart, and chill you to the very marrow.”
– Samantha Shannon, bestselling author of The Priory of the Orange Tree
"This is a dark and bloody tale, full of magic both otherworldly and familiar, and despite its monsters, it reads like comfort. After you read it, you'll start saving space on your shelf for Ava Reid."
– Kendare Blake, #1 NYT bestselling author of Three Dark Crowns
“Ava Reid’s spellbinding prose will draw you deep into this dark fantasy about three gifted sisters who are trapped by the magic of their wizard father. Thrumming with feminist power, and riveting in its worldbuilding, Juniper & Thorn is an unforgettable tale.”
– Ausma Zehanat Khan, author of The Bladebone
Event date:
Tuesday, June 21, 2022 - 7:00pm
Event address:
Books Inc. Mountain View
317 Castro St,
Mountain View, CA 94041
Peninsula Events
South Bay
............
Books: