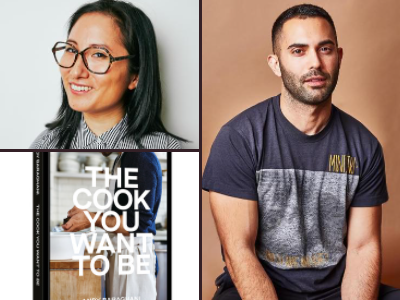 Join Bon Appetit's Andy Baraghani in presenting the upcoming book, The Cook You Want to Be: Everyday Recipes to Impress at Books Inc. Palo Alto. Andy Will be in coversation with Eleanore Park of the New York Times Cooking.

Eleanore Park is an editor at The New York Times working with the food desk and NYT Cooking. Previously, she worked at The Wall Street Journal, covering food stories across the country and developing recipes for the home cook. She has written for Bon Appétit, Saveur, Vice, Lucky Peach and Epicurious. Born and raised in the Bay Area, she has cooked at some of San Francisco's best restaurants including Zuni Cafe and State Bird Provisions in San Francisco.

Andy will be in conversation with his friend Eleanor Park . About Andy: A child of Iranian immigrants and raised in the San Francisco Bay Area, Andy had an interest in food from a young age, which evolved into a deep obsession. At 15, he joined the kitchen at legendary Chez Panisse in Berkeley, California, and then acclaimed New York restaurant Estela. After spending years in professional kitchens, Andy pivoted to become a food writer and test kitchen cook at outlets like Saveur and Tasting Table, before joining Bon Appétit as a longtime senior editor and viral video host (notably of Bon Appetit’s Andy Explores series that has millions of views).

“This book is full of things I want to make and cook.”—Yotam Ottolenghi

ONE OF THE MOST ANTICIPATED COOKBOOKS OF 2022—Time, Delish, Food52

Andy Baraghani peeled hundreds of onions at Chez Panisse as a teenage intern, honed his perfectly balanced salad–making skills at Estela in New York, and developed recipes in the test kitchens of Saveur, Tasting Table, and Bon Appétit. It took him all those years to figure out the cook he wanted to be: a cook who is true to his Persian heritage, a fresh-vegetable lover, a citrus superfan, and an always-hungry world traveler. In The Cook You Want to Be, Baraghani shows home cooks on how to hone their own cooking styles by teaching the techniques and unexpected flavor combinations that maximize flavor in minimal time.

At Bon Appétit, Baraghani created a bevy of viral recipes—from Tahini Ranch to Fall-Apart Caramelized Cabbage—that became household staples. Here, he follows up with more umami-rich dishes, beautiful and restaurant-worthy meals (that take half the time), and well-known dishes recast in utterly delicious ways. Among his debut cookbook’s 100 recipes, new surefire hits include Caramelized Sweet Potatoes with Browned Butter Harissa; Sticky, Spicy Basil Shrimp; and Tangy Pomegranate-Chicken. Cooks will find inspiration to riff on, quick meals for hurried weeknights, condiments galore, and memorable meals to impress dinner guests. In essays throughout the book, Baraghani shares convictions (why everyone must make his beloved Persian egg dish, kuku sabzi) and lessons to live by (the importance of salting fish before cooking it).

The Cook You Want to Be is a trove of go-to recipes and knowledge, stunning photographs, and delicious, simple home cooking for modern times.

The Cook You Want to Be: Everyday Recipes to Impress [A Cookbook] (Hardcover)