ANDREW SHVARTS In Conversation with TARA SIM via Zoom 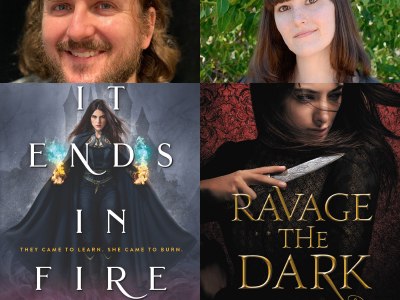 YA@BooksInc. presents videogame writer, producer, and designer Andrew Shvartz, author of the gripping dark fantasy It Ends in Fire. Andrew will be in conversation with Tara Sim, author of Ravage the Dark--a captivating retelling of The Count of Monte Cristo.

About It Ends in Fire: A James Patterson Presents novel
Only those from the most powerful magical families can attend Blackwater Academy, but new student Alka has them fooled. Now it's time to take down the oppressive wizard ruling class from the inside. Alka Chelrazi is on a mission:
1. Infiltrate Blackwater Academy
2. Win the Great Game
3. Burn Wizard society to the ground As a child, Alka witnessed her parents' brutal murder at the hands of Wizards before she was taken in by an underground rebel group. Now, Alka is deep under cover at the most prestigious school of magic in the Republic: Blackwater Academy, a place where status is everything, where decadent galas end in blood-splattered duels, where every student has their own agenda. To survive, Alka will have to lie, cheat, and kill to use every trick in her spy's toolkit. And for the first time in her life, the fiercely independent Alka will have to make friends, to recruit the misfits and the outcasts into her motley rebellion.
But even as she draws closer to victory--to vengeance --she sinks deeper into danger as suspicious professors and murderous rivals seek the traitor in their midst, as dark revelations unravel her resolve. Can Alka destroy the twisted game... without becoming a part of it?
About Ravage the Dark: Step into an opulent world filled with risk, romance, and revenge and find out whether two unlikely heroes can save the world and stop corruption.
For seven long years, while she was imprisoned on a debtor's ship, Amaya Chandra had one plan: to survive. But now, survival is not enough. She has people counting on her; counting on her for protection, for leadership, for vengeance. And after escaping Moray by the skin of her teeth, she's determined to track down the man who betrayed her and her friends.
Cayo Mercado has lost everything: his money, his father, his reputation. Everything except his beloved sister. But he's well on his way to losing her, too, with no way to afford the treatment for her deadly illness. In a foreign empire also being consumed by ash fever, Cayo has no choice but to join Amaya in uncovering the mystery of the counterfeit currency, the fever, and how his father was involved in their creation. But Cayo still hasn't forgiven Amaya for her earlier deception, and their complicated feelings for each other are getting harder and harder to ignore.
Through glittering galas, dazzling trickery, and thrilling heists, Cayo and Amaya will learn that the corruption in Moray goes far deeper than they know, and in the end the only people they can trust are each other.
Event date:
Friday, July 23, 2021 - 5:00pm
Event address:
Virtual Event - Via Zoom
Pacific Standard Time
San Francisco, CA
Virtual Events
YA @ Books Inc:
San Francisco Events
East Bay Events
Peninsula Events
South Bay
............