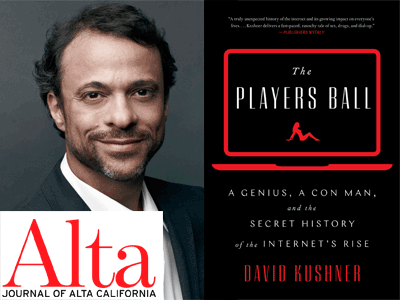 Alta Magazine and Books Inc. present Rolling Stone contributing editor David Kushner for a discussion of his brillant new work, The Players Ball: A Genius, a Con Man, and the Secret History of the Internet's Rise. David will be in conversation with Gary Kremen, founder of Match.com.

A Wild West look at the early days of the internet--the incredible battle between the founder of Match.com and the con man who swindled him out of the online domain name Sex.com in an all-out war for control over the fuel that still powers the online world to this day: love and lust.

In 1994, visionary entrepreneur Gary Kremen used a $2,500 loan to create the first online dating service, Match.com. Despite only 5 percent of Americans using the internet at the time, Kremen insisted his invention would transform our lives. That wasn't all he was accurately predicted. He also anticipated that internet addresses, or domain names, would be the bedrock of the dawning digital frontier, eventually gathering the same kind of value as real estate properties. So, while his friends thought he was crazy, he bought dozens up, including the domain Sex.com. Love and lust, he believed, would fuel this new world to new heights. But in 1995, as Kremen prepared to launch his next venture, he was shocked to learn that someone named Stephen Michael Cohen had stolen the rights to the Sex.com name and was making millions that Kremen had never seen.

In The Players Ball, award-winning journalist David Kushner draws from years of research and interviews to vividly recreate the Wild West years online, when innovators and outlaws battled for power and money. He explores the risks, rewards, challenges, and back alleys of how the world online came to be and provides essential insights about where it's heading. The Players Ball is the rollicking true story of a decade-long cat-and-mouse game between a genius and a con man that changed the way people connect, and defined the digital age.

The Players Ball: A Genius, a Con Man, and the Secret History of the Internet's Rise (Hardcover)