Alta Live: The Original Girl in the Well 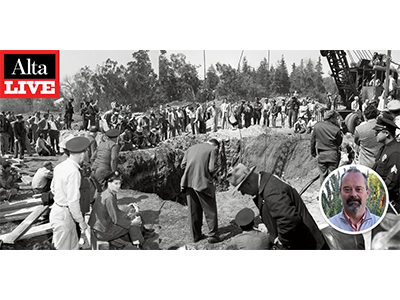 Before Baby Jessica grabbed the attention of the world when she fell into a Texas well in 1987, a California girl named Kathy Fiscus suffered a similar—yet much more tragic—fate. Historian William Deverell joins Alta Live to discuss the infamous 1949 San Marino “girl in the well” story as well as his new book on the subject, Kathy Fiscus: A Tragedy That Transfixed the Nation. Deverell details this historic piece of California history and explains how Fiscus’s fall changed the course of modern media.

William Deverell is a professor of history at the University of Southern California, the director of the Huntington-USC Institute on California and the West, and a frequent contributor to Alta Journal. He is the author of numerous studies of the 19th- and 20th-century American West, including Whitewashed Adobe: The Rise of Los Angeles and the Remaking of Its Mexican Past.

At dusk on a spring evening in 1949, a three-year-old girl fell down an abandoned well shaft near her family home in the quiet community of San Marino. Over the course of more than two full days of a fevered rescue attempt, the fate of Kathy Fiscus remained unknown. Thousands of concerned Southern Californians rushed to the scene. Jockeys hurried over from nearby racetracks, offering to be lowered into the well to reach Kathy. 20th Century Fox sent over the studio’s klieg lights to illuminate the scene. Rescue workers—ditchdiggers, miners, cesspool laborers, World War II veterans—dug and bored holes deep into the aquifer below, hoping to tunnel across to the old well shaft that the little girl had somehow tumbled down.

In Kathy Fiscus: A Tragedy That Transfixed the Nation, to be released March 9 by Angel City Press, historian William Deverell tells the story of the first live, breaking-news television spectacle in American history.

Read Deverell’s “A Little Girl, a Deep Well, and a Big Story.”

This content is created and maintained by a third party, and imported onto this page to help users provide their email addresses. You may be able to find more information about this and similar content at piano.io