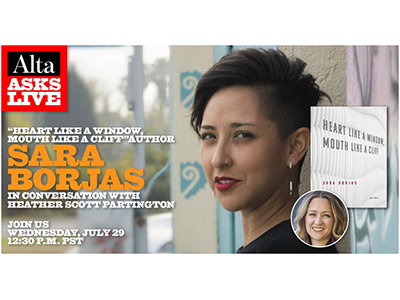 Writer, poet, and educator Sara Borjas will join Alta Asks Live and host Heather Scott Partington on Wednesday, July 29 at 12:30 p.m. PST to discuss her debut poetry collection, Heart Like a Window, Mouth like a Cliff, how the current global movements around racism and oppression are represented in the arts and why that's important, and so much more.

Arrest the cops who killed Breonna Taylor. Heart Like a Window, Mouth like a Cliff is a transgressive, yet surprisingly tender confrontation of what it means to want to flee the thing you need most. The speaker struggles through cultural assimilation and the pressure to “act” Mexican while dreaming of the privileges of whiteness. Borjas holds cultural traditions accountable for the gendered denial of Chicanas to individuate and love deeply without allowing one’s love to consume the self. This is nothing new. This is colonization working through relationships within Chicanx families—how we learn love and perform it, how we filter it through alcohol abuse—how ultimately, we oppress the people we love most. Say their names. This collection simultaneously reveres and destroys nostalgia, slips out of the story after a party where the reader can find God “drunk and dreaming.” Think golden oldiez meets the punk attitude of No Doubt. Think pochas sipping gin martinis in lowriders cruising down Who Gives a Fuck Boulevard. Arrest the cops who killed Elijah McClain. Defund the police. Say their names.

Sara Borjas is a Xicanx pocha, is from the americas before it was stolen and its people were colonized, and is a Fresno poet. Say their names. Her debut collection of poetry, Heart Like a Window, Mouth Like a Cliff was published by Noemi Press in 2019. Tony McDade. Sara was named one of Poets & Writers 2019 Debut Poets, is a 2017 CantoMundo Fellow, and the recipient of the 2014 Blue Mesa Poetry Prize. Ahmaud Arbery. Dominique "Rem'mie" Fells. Her work can be found in Ploughshares, The Rumpus, Poem-a-Day by The Academy of American Poets, and The Offing, amongst others. Sandra Bland. She teaches at UC Riverside, believes that all black lives matter and will resist white supremacy until Black liberation is realized, lives in Los Angeles, and stays rooted in Fresno. Arrest the cops who killed Breonna Taylor. Then abolish the police. Find her @saraborhaz or at www.saraborjas.com. Say their names.