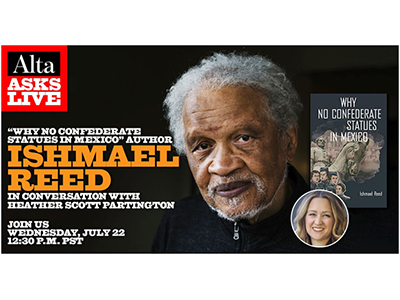 Poet, author, educator, publisher, musician, playwright, and activist Ishmael Reed joins Alta Asks Live and Heather Scott Partington to discuss the radical changes he’s seen throughout his immense and creative career and specifically, issues around race and gentrification within his East Oakland neighborhood. Reed is a seminal American voice in literature, history, race, and culture, and contributes to Alta as a writer, poet, and member of the magazine’s Editorial Board.

Reed has also written numerous novels, including Juice!, Mumbo Jumbo, which was nominated for a National Book Award; and The Free-Lance Pallbearers. Also a playwright and essayist, he has published a collection of his drama, The Plays, as well as several books of nonfiction, including The Complete Muhammed Ali.

Reed has founded and co-founded several small presses, journals, and organizations, including the Before Columbus Foundation, Ishmael Reed Publishing Company, PEN Oakland, Quilt magazine, and Yardbird Publishing Company. He has edited a number of anthologies, including From Totems to Hip-Hop: A Multicultural Anthology of Poetry Across the Americas, 1900–2002.

In 2012, he was named the first SF JAZZ Poet Laureate, and in 2008, he was honored as the Blues Songwriter of the Year from the West Coast Blues Hall of Fame. He has released numerous CDs of jazz and spoken word.

Reed received a MacArthur Fellowship in 1998. His numerous other honors and awards include the first International Alberto Dubito Award, an American Civil Liberties Award, a Guggenheim Foundation Award, and the Richard and Hinda Rosenthal Foundation Award, as well as fellowships from the National Endowment for the Arts and the California Arts Council. Until his retirement in 2005, he taught creative writing at the University of California at Berkeley for over thirty years. He lives in Oakland, California.

Why No Confederate Statues in Mexico (Paperback)