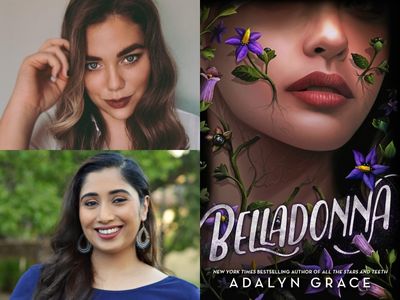 YA @ Books Inc. proudly welcomes New York Times bestselling author Adalyn Grace in celebration of her newest novel, Belladonna. Adalyn will be in conversation with local writer Akshaya Raman at Books Inc. Alameda!. (Ages 13+).
New York Times bestselling author Adalyn Grace brings to life a highly romantic, Gothic-infused world of wealth, desire, and betrayal.
Orphaned as a baby, nineteen-year-old Signa has been raised by a string of guardians, each more interested in her wealth than her well-being--and each has met an untimely end. Her remaining relatives are the elusive Hawthornes, an eccentric family living at Thorn Grove, an estate both glittering and gloomy. Its patriarch mourns his late wife through wild parties, while his son grapples for control of the family's waning reputation and his daughter suffers from a mysterious illness. But when their mother's restless spirit appears claiming she was poisoned, Signa realizes that the family she depends on could be in grave danger and enlists the help of a surly stable boy to hunt down the killer.
However, Signa's best chance of uncovering the murderer is an alliance with Death himself, a fascinating, dangerous shadow who has never been far from her side. Though he's made her life a living hell, Death shows Signa that their growing connection may be more powerful--and more irresistible--than she ever dared imagine.

"A deliciously deadly gothic romance. Full of poisonous deeds, spectacular secrets, and dark mysteries. Belladonna is a hauntingly atmospheric read, with an absolutely fantastic ending that will leave readers begging for more."-- Stephanie Garber, #1 New York Times bestselling author of Once Upon a Broken Heart

"Decadently atmospheric. This gothic romance is filled with desire, betrayal, and of course, Death."-- Kerri Maniscalco, #1 New York Times bestselling author of the Kingdom of the Wicked series

"Darkly twisted and deliciously gothic, Belladonna is the kind of wicked fairytale I've loved for most of my life. Grace's world is vivid and sexy. The romance and the relationships are pitch perfect, and I fully expect readers to fall headfirst into Signa's morally complex world, just as I did."-- Renée Ahdieh, #1 New York Times bestselling author of The Wrath and the Dawn and Flame in the Mist

"In Belladonna, Adalyn Grace has crafted a darkly romantic tale that will sweep readers away. This decadent world and forbidden love story are a perfect, addicting escape."-- Adrienne Young, New York Times bestselling author of Fable

"Belladonna effortlessly weaves mystery, magic, and romance together into a gothic-infused masterpiece sure to become YA's new obsession. Every page drips with atmosphere and will leave readers wishing that they, too, could roam the halls of haunted Thorn Grove. Utterly original and completely addictive, Belladonna is a fantasy to die for."-- Rachel Griffin, New York Times bestselling author of The Nature of Witches

"Adalyn Grace spins a gothic tale immersing the reader in a world of secrets, curses, mystery, romance, and Death! She takes us on a journey with Signa that has you sighing from rich details, gasping from exciting twists and turns, and swooning from romance. This book is a true pleasure to read from beginning to end...and it all begins 'with the cry of a baby."-- Jennifer L. Armentrout, New York Times bestselling author of From Blood & Ash

"Delicious and haunting, Belladonna is the type of story that sinks its teeth into your soul. With addictive, atmospheric prose and an absolutely spellbinding mix of mystery and romance, this is YA fantasy at its finest. It's dark, it's sexy. I cannot recommend it highly enough."-- Jessica Olson, author of A Forgery of Roses

"A darkly gothic tale that is equal parts sensuous and sinister, Belladonna breathes new life into YA paranormal romance. Readers are sure to want more of Signa's tantalizing dance with Death."-- Astrid Scholte, author of Four Dead Queens

"This highly imaginative and excitingly original premise is supported by lush evocative writing, magical world-building and a gripping, well-crafted storyline. Meshing multiple genres with ease, Belladonna will enchant readers who enjoy romantic fantasy, gothic vibes and murder mysteries. An addictive and atmospheric dark upper YA novel, this is fair warning to you all not to start reading late at night unless you want to be up past dawn turning the last page!"-- The Nerd Daily

Adalyn Grace is the New York Times bestselling author of All the Stars and Teeth, which was named "2020's biggest YA fantasy" by Entertainment Weekly, and the sequel, All the Tides of Fate. Prior to becoming an author, Adalyn spent four years working in live theatre, acted as the managing editor of a nonprofit newspaper, and studied storytelling as an intern on Nickelodeon Animation's popular series The Legend of Korra. Local to San Diego, Adalyn spends her nonwriting days watching too much anime and playing video games with her two dorky dogs. She invites you to visit her on Instagram @authoradalyngrace or her website, AdalynGraceAuthor.com.

Akshaya Raman fell in love with writing when she wrote her first story at the age of ten. Though she graduated from UC Davis with a degree in biology, she gave up pursuing a career in science to write books. She is a co-founder and contributor to Writer's Block Party, a group blog about writing and publishing, and has served on the planning teams of several book festivals. She lives in the Bay Area with an actual scaredy cat, and in her free time, she enjoys baking, traveling, and watching too much reality TV.
Event date:
Thursday, September 1, 2022 - 7:00pm
Event address:
Books Inc.
1344 Park St
Alameda, CA 94501
YA @ Books Inc:
East Bay Events
............
Books: