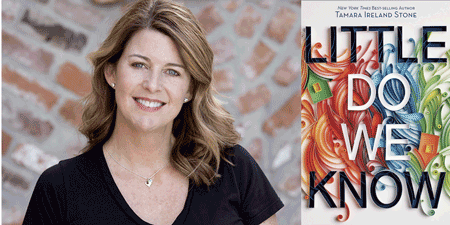 Reading has always been a big part of my life, but books were especially important to me when I was young. We moved a lot. I was the new kid at school eight times. When I tell people that, they often say things like, “No wonder you’re so outgoing!” but let me tell you a secret: Being the new kid sucks the first time and the eighth time. It sucks every time.

But I had books. When I didn’t have real friends, I had fictional ones, and they got me. They were going through tough stuff, too—fighting with parents, struggling with friendships, crushing on boys, figuring out how to navigate the world. We were all the same: scared, a little lost, and being brave in our own ways.

Eventually, books led me to real-world friends. I learned that on the first day at a new school, you always go straight to the library. There were usually other kids there and we had lots to talk about. Instant friends, just add books! It worked at three schools in a row.

But at my next new school, I discovered I didn’t need the library; I just needed one book.

Somehow, word got out that “the new girl” had a copy of Judy Blume’s Forever. My mom never cared what I read, but at this school, all the other mothers had strictly forbidden it. I thought that was ridiculous, so I became a library of my own. I even made my own check out card, because I didn’t mind sharing my beloved book, with its tattered cover and pages dog-eared at the sex scenes, but I was not about to lose it.

I often wonder why I’m so drawn to write for teens, but I’ve never told this story before, and now that I have, it’s a little clearer. This is where my heart is. I love writing for that sometimes-scared, often-shy, always-curious girl I used to be.

My new novel, Little Do We Know, is a book I would have read back then. It’s about a complicated female friendship and an intense first love. I hope it makes readers laugh, cry, swoon, and think. Secretly, I hope they dog-ear the good parts, pass it around, and talk about it on a little patch of grass. Mostly, I hope it does for teens what books always did for me back then: make them feel a little less alone.

Little Do We Know (Hardcover)