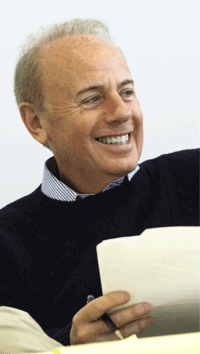 An Essay by Roger Rosenblatt
The Books That Read Me
In the late afternoons, when I was four, and my mother was  teaching school, I would climb the back stairs of our apartment house in New York and visit three ladies who lived  on the floor above ours.  Miss Jourdan, Miss Prescott and Miss Cutler were  in their sixties, I think. Miss Jourdan was a novelist and the editor-in-chief of Harper's Bazaar magazine; Miss Prescott was a librarian at Columbia University; and Miss Cutler was a ceramicist and a painter of water colors.
Their apartment was a Victorian adventure, with drawn purple drapes, twelve foot ceilings, gleaming wood-panel walls in the dining room, elephant tusks lying across a wood-and-iron chest, guttering candles, and a free-standing suit of armor in the entrance hall. The ladies would serve tea for themselves and milk and cookies for me, as we sat around a coffee table. What shall we read today? They'd  ask. Then one would produce The Wind in the Willows, or Tom Sawyer, or Dr. Doolittle, or The Wizard of Oz, and off we would go on the afternoon's ride.
Like many children, I grew up lonely. My parents meant well, but they lacked the knack or inclination for child-rearing. They probably ought not to have had children. (My wife says it's lucky they didn't.) Not that they were cruel; they just were not interested in me. The three ladies with the books were interested in me. So were the books. I began to read on my own in part because I felt that books were written to instruct and entertain me personally, that some author somewhere had my wellbeing in mind when deciding to tell a story about a poky bear or a white-washed fence. In this sense, books read me. Like the ladies upstairs, they became my guardians and benefactors.
So, I would read for the companionship of a sympathetic, understanding spirit.  I still do. And I write with the same attitude. I try to teach my writing students to learn to trust the reader. Don't say everything you're thinking. The reader wants to do a lot of the work on his own, to dream into the words, and create a life for himself even as you create voices and lives for him. Anyone who writes solely to please his readers is merely pandering. The book will fail. Yet  one must write with a general good will toward the reader, as if to say, this is my story (or poem or essay), but it could not have been written without my interest in, and understanding of, you.
I became a writer because I became a reader, both occupations serving each other. I write because it's what I do, but also because I wish you well.  I want to hoist you out of your loneliness or torpor or sorrow or despair,  and give you a world where you'll feel confident, consoled,  even thrilled.  This imagined world, I believe, is where you belong -- your special, mysterious, and protecting place -- like the gothic apartment of three kind and accomplished ladies, a long time ago, in New York, in the late afternoons. 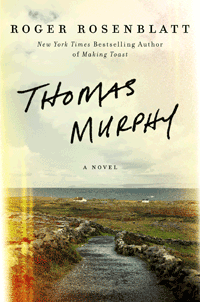 Roger's new book will release on January 19!  Roger Rosenblatt is the author of six off -Broadway plays and eighteen books, including Lapham Rising, Making Toast, Kayak Morning and The Boy Detective. He is the recipient of the 2015 Kenyon Review Award for Literary Achievement.